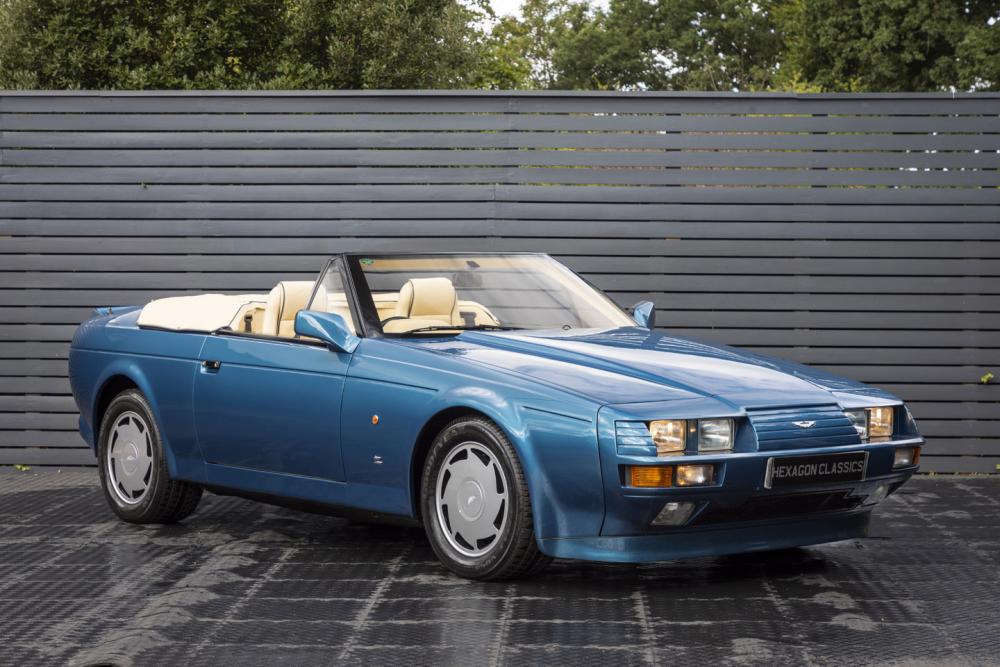 Hexagon Classics are delighted to offer this ultra-low mileage example of the very special Aston Martin Volante from the famous Carrozeria Zagato of Milan.  One of only 25 right-hand drive cars from a worldwide total of just 37 vehicles, this aluminium-bodied Volante will appeal to serious collectors of the marque.

The V8 Zagato, as the name suggests, was based on the Aston Martin V8 but with a body by the famed Zagato. This limited run of cars were the result of an idea of former Aston Martin Chairman Victor Gauntlett and the brothers Elio and Gianni Zagato.  The design was an angular modern interpretation of the Aston Martin DB4 GT Zagato of the 1960s. It was also the first two-seat production Aston Martin since the DB4 GT.

Despite the lack of a fixed roof, the Volante has better torsional rigidity than the coupe version. The Volante had a revised radiator grill and pivoted ‘eyelids’ to cover the head lamps when they are not in use.  Extra strengthening added just 35kg in weight and together with the EFI engine its performance was ahead of the standard V8 Volante with 320 bhp, with a claimed top speed of 160mph and 0 to 60 mph in 5.5 seconds. Although initially Aston Martin Lagonda intended to build just 25 Zagato Volantes, by the time that production ended in 1989, 37 production cars had been completed due to worldwide demand from Aston Martin collectors.

Supplied new by Aston Martin of Kensington, London, at a cost of over £190,000, chassis number 30024 has had just 2 former keepers, and has been serviced by the Aston Martin Lagonda Ltd Works at Newport Pagnell, and more recently by H.R Owen Ltd.  Exceptional quality, low mileage examples of Zagatos have become rare indeed.