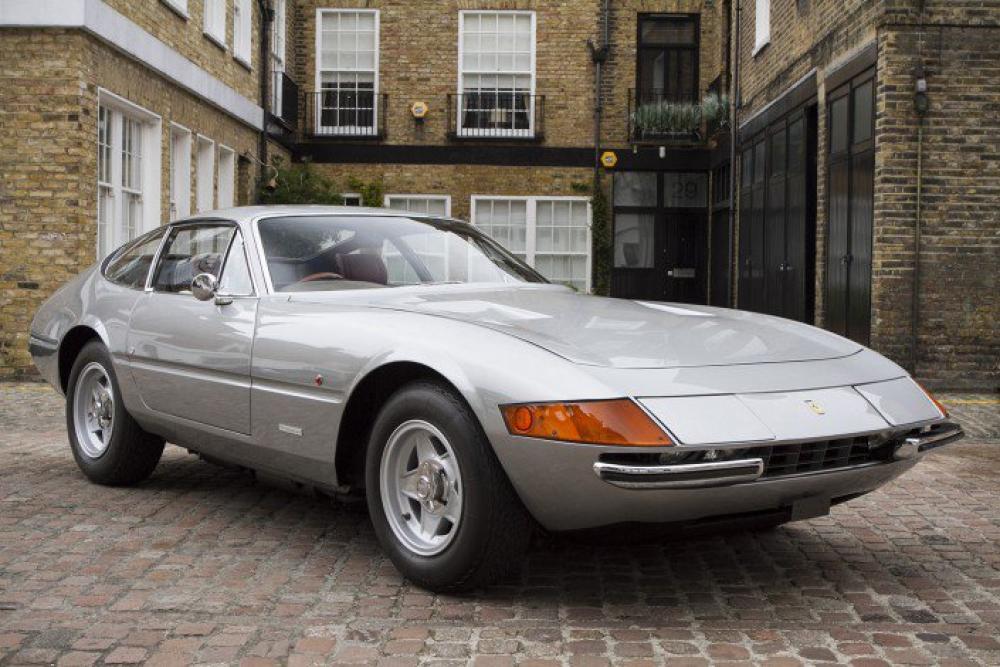 Right Hand Drive: Correct Matching Numbers: Ferrari Classiche
It was at the Paris Auto Salon in 1968 that the new Ferrari 365 GTB/4 was first displayed. The successor to the 275 GTB/4, it was then the most expensive and fastest street Ferrari ever built. The prototype shown at the Paris Salon was designed and built by Pininfarina, and it is evident in the glorious lines. The Daytona, as it was to be known (in recognition of Ferrari’s one-two-three win at the 24-hour race the previous year), had aggressive, bold and yet handsome lines with the performance to match

When driving the Ferrari one gets the feeling that it is strong, powerful and bold; at 3600 plus pounds it was the heaviest to come from the Ferrari drawing boards. Although weight does not seem to bother handling, and the excellent horsepower and torque give the Daytona the aggressive performance to match its bold looks. As the last of the line of great front-engined V12 berlinettas, the Daytona holds a special appeal for Ferrari enthusiasts. In many ways, it is the most “macho” of the Ferraris and its popularity is reflected in the fact that the Daytona has become one of the most desirable Ferraris of all time.

Our car #15035 is totally unique in many ways; we understand that the car has never been offered for sale publicly since being supplied new to South Africa in 1972; the car has covered only 58,061 miles! The originality of the car both mechanically, interior and associated equipment is outstanding.  On the acquisition of the Daytona we commissioned a complete post sales service preparation of our car carried out by factory official Ferrari Service Centre together with the issuance of Classiche Certification.

Accompanying the car is an historical chassis file and equipment includes:

Without doubt this is a once in a life time opportunity to acquire one of Ferrari’s most highly sought-after models; with its correct matching numbers, the issue of the factory certification, presented in concours condition throughout with such unique and original features including the fitment of air conditioning.