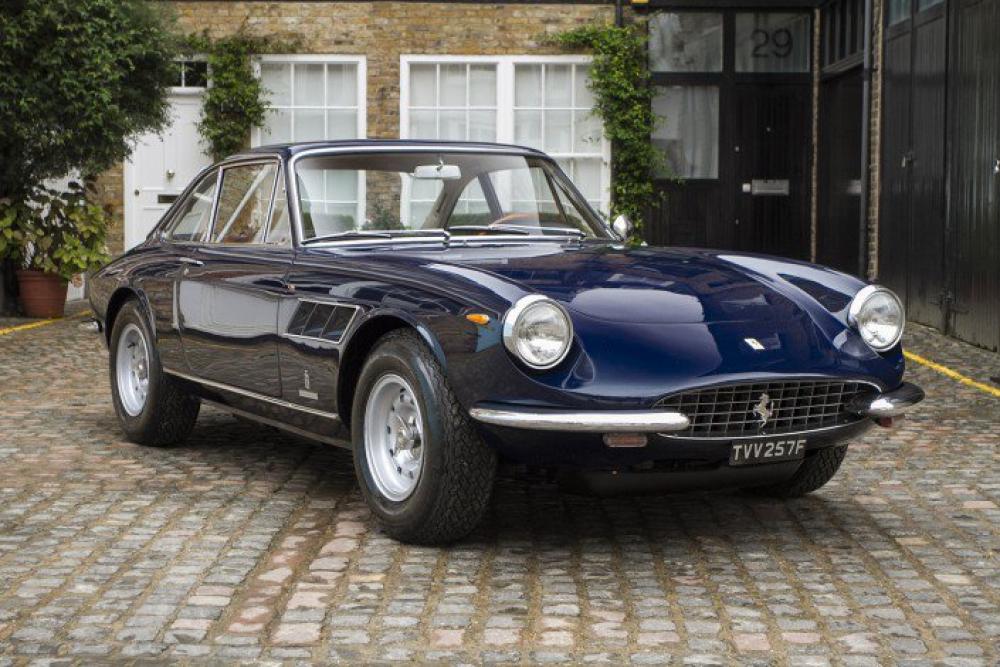 The GTC Berlinetta was introduced at the Geneva Motor Show in March 1966; designed by Pininfarina. The cars were more like their 275 counterparts than the 330 GT 2+2. They shared the short wheelbase of the 275 as well as its independent rear suspension. If there was a sixties Ferrari that only Ferrari people knew about it was the 330 GTC! Maybe it was the stunning looks of this Pininfarina design or the brakes, steering, rear transaxle and fully independent suspension of a 275. Once one knows the models, it becomes obvious how the cars design differentiates the GTC from the 2+2 GT. In fact, despite the familiar name, it would be more appropriate to consider it a descendant of the 275 GTB, rather than the other model.

The tidy tail clearly has something in common with the 275 GTS, which immediately preceded it in the line-up, while the front end shares a grille and treatment with the 400 and 500 Superfast. As a 1967 model, the GTC also benefits from the single headlamp styling of the Series II 330 line. An interior new for the GTC is sumptuous in the way that Ferrari seems to have mastered—one touches only leather, metal, or the Nardi wood wheel. There is no back seat, occasional or otherwise. Instead, 330 GTC owners have luggage space not for a weekend, but for a week. The seats are comfortably padded and adjustable, and further improvements from the 1966 restyling are evident in the interior as well, such as rocker switches in an extended console.

From the beginning, discerning drivers recognized that Ferrari had successfully cherry-picked the best elements of several road cars. If the 275 had a weakness, it was the open driveshaft, so the GTC has a torque tube design that addresses that potential area of trouble.  If one considers that 0–60 times in the mid six-second range are still sporting today, then the pure speed of this model almost 50 years later abruptly comes into focus. Top speed is an honest 150 mph, which will have the needle horizontal on the 300 km/h Veglia speedometer. Thee 300 peak horsepower comes at the indicated redline of 6,600, when the engine is singing its Maranello song.

There is a mystique associated with the short wheelbase Ferraris for a reason. These street cars are closer to their racing cousins than the pure GT models. With a completely different rear suspension, there is little comparison between a 330 GTC and other 330 derivatives. In this car, one sits almost over the rear axle, making it natural to steer with the rear end. There is less discernible body lean, and the car’s centre of gravity is lower as well. It can be a thoroughly sporting experience in the Ferrari tradition, but when driven at a slower pace, it is perfectly suitable for extended journeys in comfort. A very stiff tubular chassis pays dividends in that regard: where an English car might be hard sprung to accommodate chassis flex, the GTC can have more compliant suspension and thus superior ride quality. Steering is by worm and roller steering and can be heavy and slow in parking. At speed when it counts, though, it becomes immaculately accurate and perfectly light. Like all the great V-12 Ferraris, a 330 GTC seems to come ever more alive the harder its driven, communicating everything a driver needs to know, and nothing one does not.

Our car no. 10989 was supplied new by Crepaldi the official Ferrari distributor for Milan; commissioned to be built in colour specification of Blue Scuro and upholstered in Beige hide as the car is presented today.

Accompanying the car is an historical chassis file which includes:

The conclusion of our sales preparation and post services includes: application and submission for the issuance of Ferrari Classiche Certification, service works and all safety checks completed by an official Ferrari factory service agent. This is a rare opportunity to acquire one of Ferrari’s most highly sought after models; with its correct matching numbers, the issue of the factory certification and presented in superb order throughout and represents exceptional value in today’s marketplace.