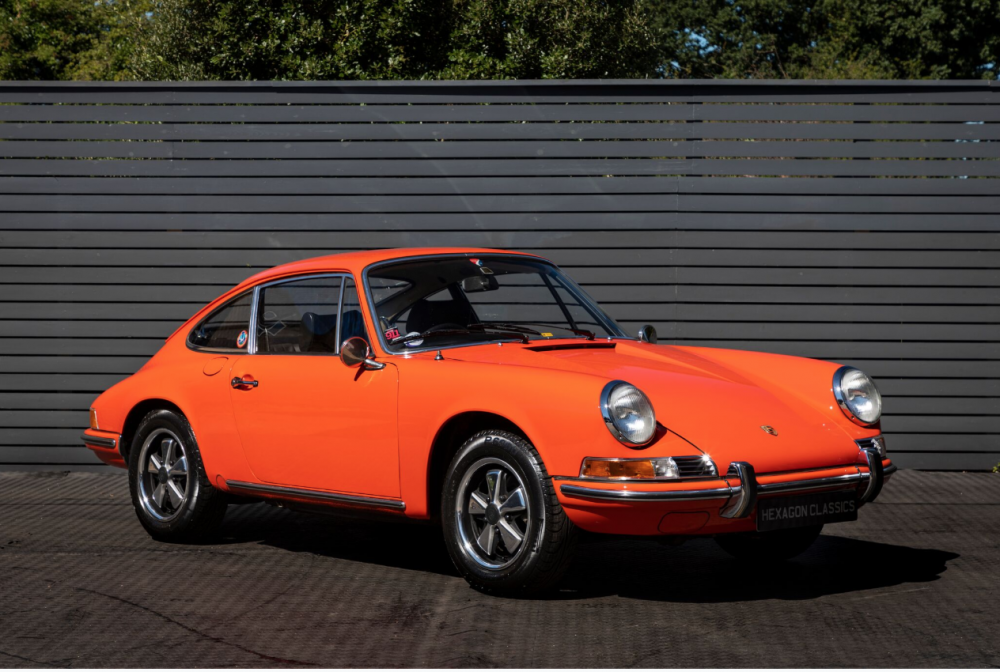 The 911T was first produced in 1970 and was the most useable and driveable car within the Porsche range. The car featured all new carburettors, instead of the fuel injection system that was fitted to other 911’s. This was a key factor that aided in creating a lovely and smooth power curve that was essential in improving the driveability of the car.

Despite being the standard car in the 911 range of the time, it featured various upgrades, part of other 911’s within the range such as uprated ventilated brake discs and the option to fit Fuchs alloys over the standard steel wheels. These performance upgrades that make the 911T a fantastic driving experience help to make the 911T great value for money when compared to its sister car, the 911S.

This fantastic example is presented in stunning tangerine orange which is beautifully complement by the black leatherette interior. Alongside the immaculate interior and bodywork, it is presented in fantastic mechanical condition having been lavishly cared for its entire life. The car was purchased in Scotland by Mr Campagna from the Glen Henderson Dealership in North Ayrshire. Mr Campagna owned the car for a period of 5 years up until 1977 during which time the car covered 17,000 miles. Considering that this 911T was designed as a perfectly usable every day car, Mr Campagna decided to only use the car sparingly. When Mr Campagna came to part with the car in 1977, it was purchased by the second owner, Mr Wuytack in London from the Green Card Motor company. Quite incredibly, the car remained in the ownership of Mr Wuytack until 2016. During his 39-year ownership of the car, it was only used for special occasions such as holidays and shows. This very occasional use coupled with a history containing every MOT dating back to 1978 helps to explain why and how this car is in such fantastic condition.

The car has never had, nor required any major work. This is testament to its extensive and continuous history. The sheer quantity and history within the file will be hard to match with another car and is a large reason as to why we here at Hexagon Classics were drawn to the car in the first place, alongside its excellent condition.