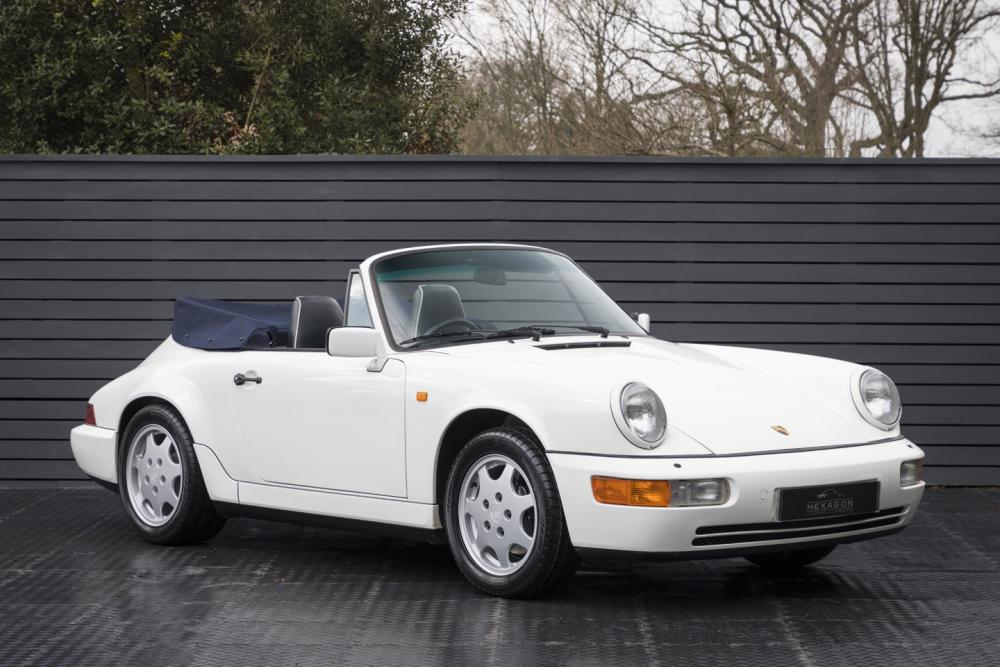 Hexagon Classics are delighted to offer this wonderful example of the iconic Porsche 964, which enjoys a lovely contrasting colour scheme and has covered an extremely low number of miles for its age.

Trying to source 964’s of this quality with provenance to match is becoming harder to action, so we are certain this example will gain lots of attention from enthusiasts looking for the ultimate summer cruising 911. When launched the 964 was considered to be 85% new compared to its predecessor, the Carrera 3.2. The first 964s available in 1989 were all wheel drive equipped “Carrera 4” models; with Porsche adding the rear wheel drive Carrera 2 variant to the range in 1990.

The 964 enjoyed a new naturally aspirated engine called the M64, with a flat-6 displacement of 3.6 litres. Porsche substantially revised the suspension, replacing torsion bars with coil springs and shock absorbers. Power steering and ABS brakes were added to the 911 for the first time; both were standard.

Aerodynamics were improved with the exterior bumpers and fog lamps becoming flush with the car and a new electric rear spoiler raised at speeds above 50 mph and lowered down flush with the rear engine lid at lower speeds. A new automatic climate control system provided improved heating and cooling. Revised instrumentation housed a large set of warning lights that were tied into the car’s central warning system, alerting the driver to a possible problem or malfunction.

Our four owner car was sold by Porsche Centre Chesterfield during August of 1990 and will be hard to be bettered in terms of its service history, having been serviced every year of its life with a Porsche main dealer, this example has an amazing total of twenty one historic MOT certificates in its history file.

This is a wonderful air cooled 911 which is not to be missed and must be viewed to be fully appreciated.