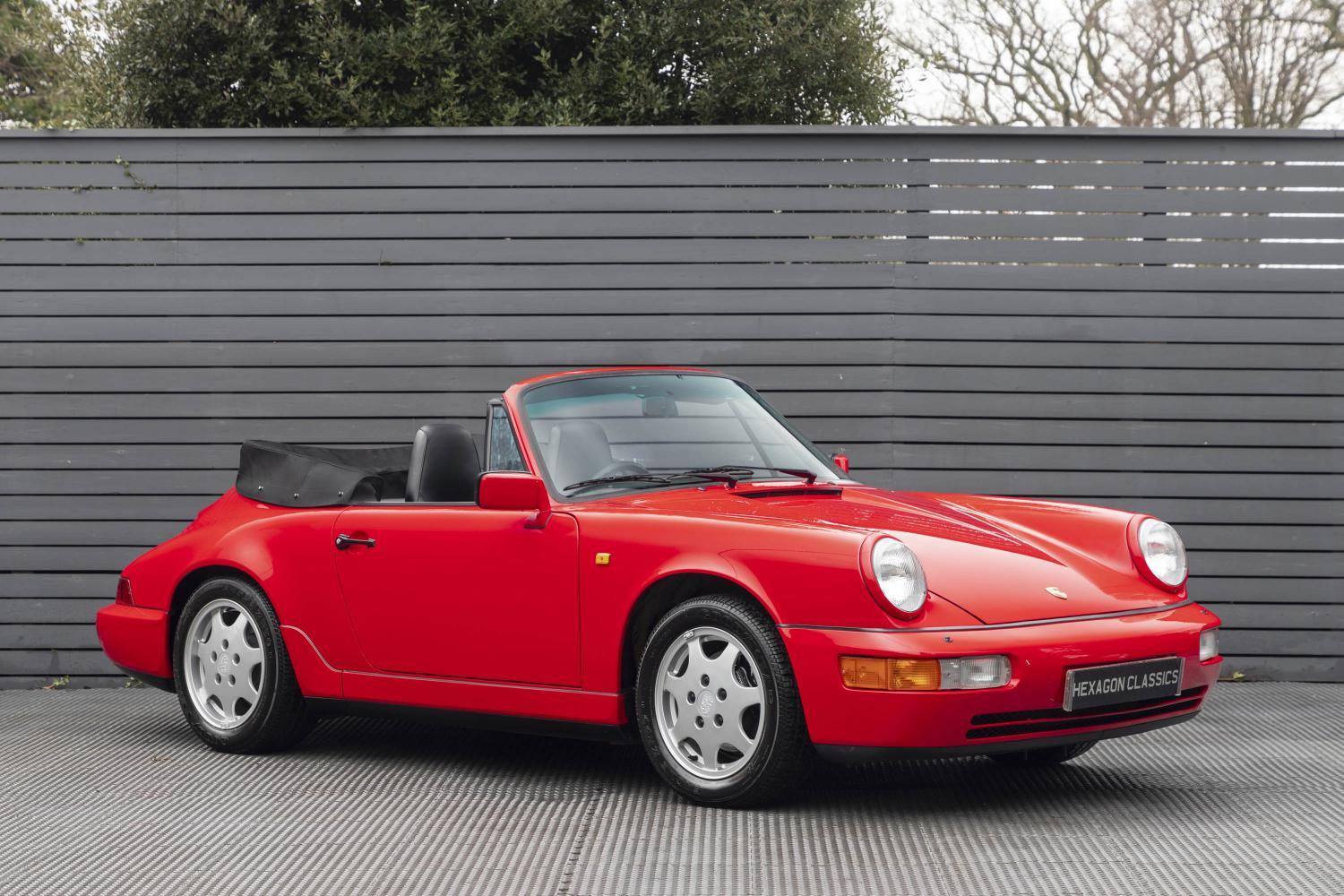 Hexagon Classics are delighted to offer what may well be the lowest mileage Porsche 964 Carrera 2 Cabriolet on offer across the United Kingdom.  Faultless in myriad respects, this original UK-supplied Porsche is a rarity that will grace any serious Porsche collection.

Trying to source 964’s of this quality with provenance to match is becoming increasingly difficult, so it follows that this example will no doubt gain worthy attention from enthusiasts looking for the definitive example of an open-topped cruising 964.

The main target for Porsche when developing the 964 series was to be rid of the limitations imposed by a 25-year-old basic design in the face of more exacting requirements on the part of their customers, increasingly strict legal requirements, and the evolution of design and production techniques.  When launched, the 964 was stated to be 85% all-new compared to its predecessor, the Carrera 911 3.2.  Porsche added the rear wheel drive Carrera 2 variant to the range in 1990.  The 964 series employed a new naturally-aspirated engine called the M64, with a flat-6 displacement of 3.6 litres.  Maximum power rose to 250 bhp. Porsche substantially revised the suspension, replacing torsion bars with coil springs and shock absorbers.  Standard equipment included power steering and ABS brakes for the first time.

For many, the Carrera 2 represented a purer form of Porsche motoring, with its traditional rear-engined, rear-wheel drive layout. Aerodynamics were improved with the exterior bumpers and fog lamps becoming flush with the car and a new electric rear spoiler raised at speeds above 50 mph and lowered down flush with the rear engine lid at lower speeds, it also featured improved heating and cooling.  Revised instrumentation completed the cabin changes.

Our three-keeper car was delivered new by Dutton-Forshaw Porsche in August 1990 and will be hard to better in terms of its originality. The original Porsche dealer-stamped service book documents, (alongside historical MOTs) confirm the ultra-low mileage. Subject to a recent recommissioning at Porsche Centre Mid-Sussex costing in excess of £10,000, this impeccable air-cooled 911 must be viewed to be fully appreciated.