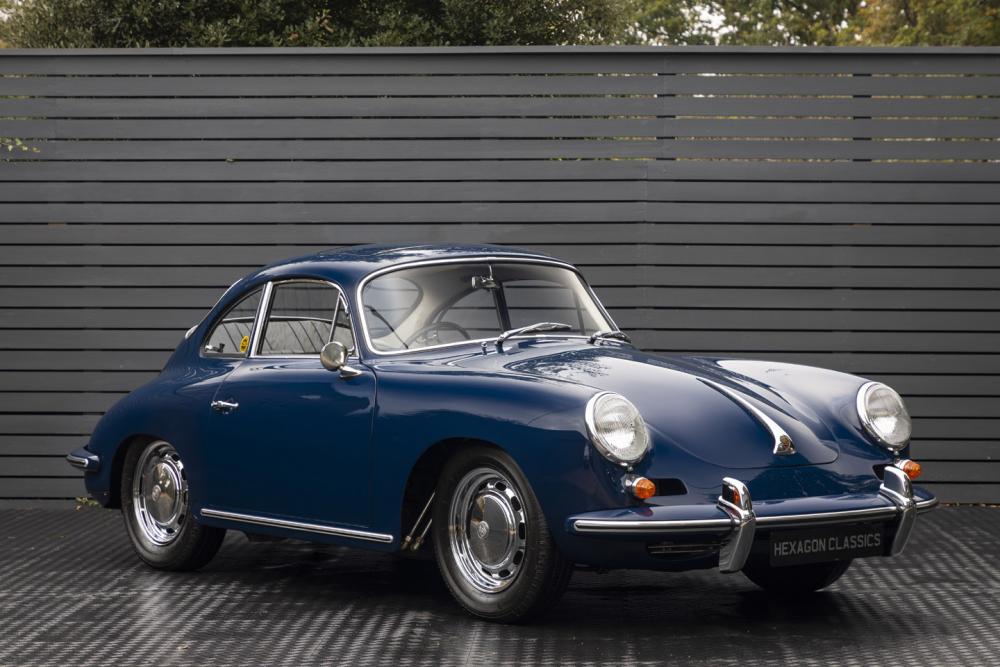 1 OF ONLY 6 RHD UK DELIVERED CARS

Our Porsche 356 C Carrera 2 2000 GS Coupe, or four-cam, is the most sought-after iteration of the iconic Porsche 356. With its enlarged four-cam 2 litre engine producing 130 bhp, these cars were intended for competition use.

This beautifully presented example is one of just six RHD UK delivered cars optioned with a factory electric sunroof, making it extremely rare. It remains a complete matching numbers car with the all-important quad-cam engine. These Porsche Carreras were the top-of-the-line models from the Zuffenhausen company. The Carrera 2 was also the first Porsche with disc brakes. Its Fuhrmann-designed engine used overhead camshafts, twin-choke Solex 40 carburettors and the Königswellen drive. Cylinder barrels were in light alloy, with a ferral coating on the bores.  Square cam box covers were also used.

The importance of the 356 in Porsche’s illustrious history is sometimes forgotten. The 356 set out the platform that the 911 would adopt and formed the basis that would enable the company to grow. The 356 was equally fantastic as both a road car and racing car and helped to cement Porsche’s place in the pantheon of motorsport greats.

Chassis number 127338 was supplied new by AFN Ltd, London in the special-order colour of Bali Blue by its first owner, privateer Ferrari racing driver, Chris Keaton. He kept the car in the UK but registered on German plates so that he was able to drive the car to and from race circuits all over Europe. He owned the car for fifteen years until it was sold in 1978 to Porsche enthusiast John Hearn. Hearn kept the car for four years before selling it in 1982 to Manfred Knebel, a German four-cam engine specialist. Manfred kept the car for twenty years during which time it was regularly exercised. Before selling the car in 2006, the engine was fully rebuilt. The car returned to the UK when purchased by renowned car collector John Ruston. This was the first time that the car was registered on UK plates despite being a UK delivered car. During Mr Ruston’s ownership the car was regularly maintained by classic Porsche specialists, Maxted-Page & Prill Ltd. In 2007 the car took part in the Tour de Espana-Portugal where it achieved second place overall in the regularity class.

This rare Porsche has a wonderful history and presents extremely well. The car is in near concours condition and represents an incredibly opportunity for a Porsche collector to acquire an incredibly important piece of Porsche’s history and heritage.

The car is available for immediate viewing at our London showroom.