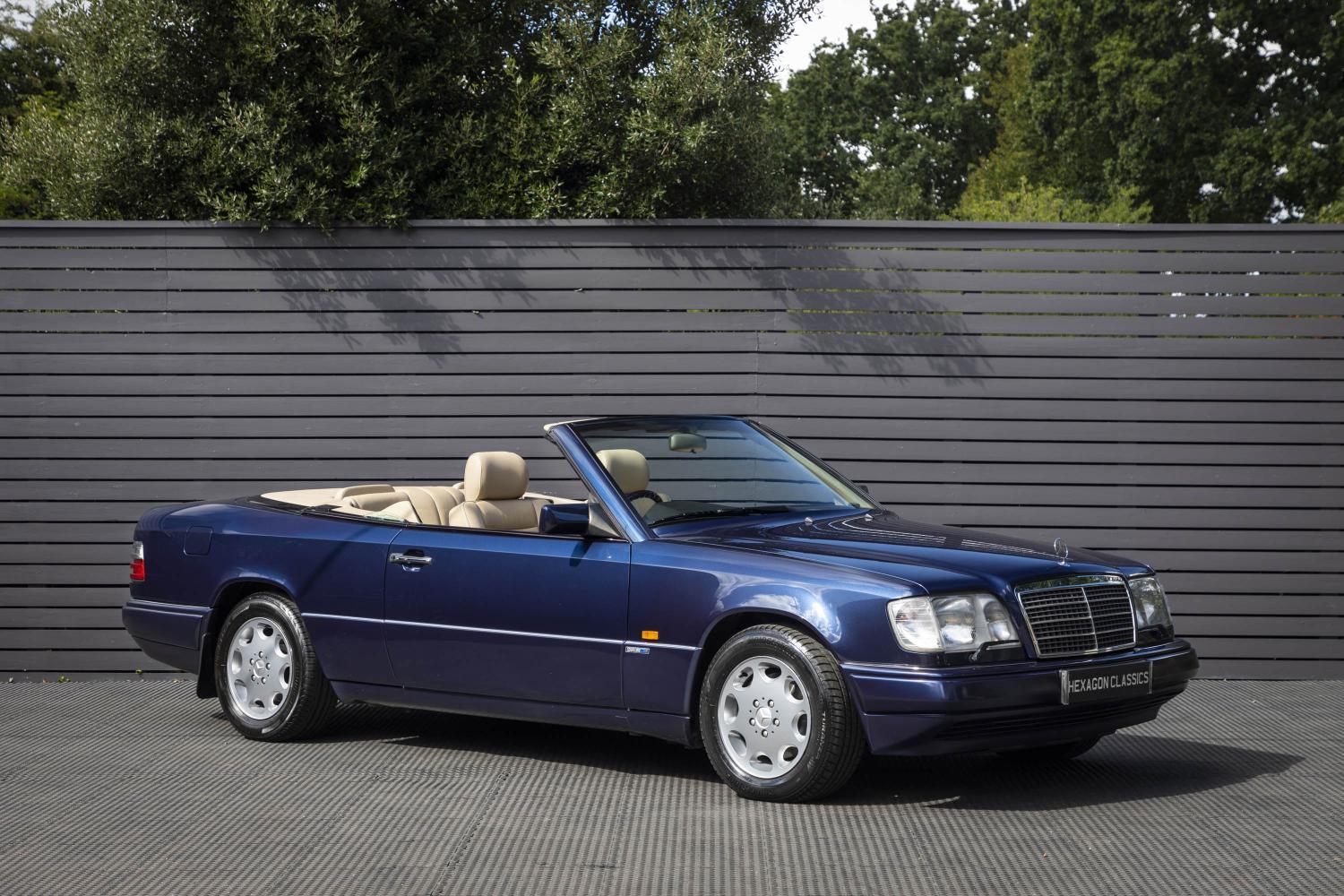 Hexagon Classics are delighted to offer what is probably the epitome of the modern classic cabriolet, which looks splendid in its classic dark blue with cream interior colour combination. This E320 Sportline Cabriolet has all the power and grace to top the list of desirable ‘90’s classics.

The E320 is powered by a Mercedes-Benz straight 6-cylinder engine, which has a double overhead cam design. The 3.2 litre version produced 228 hp at 5500 rpm and 229 lb/ft torque at 3750 rpm. The Sportline variant of the car has wider alloy wheels and wider 205/60 x 15 profile tyres, quick ratio steering and a smaller diameter steering wheel, "Sportline" badges on the front wing mouldings and gear knob, slightly lowered, (21mm) ride height and a specially tuned suspension including shorter, 20% stiffer springs, struts, anti-roll bars, and bushes. Top speed was an impressive 144 mph.   Considered by many fans of the marque as the final 'hewn-from-granite' Mercedes-Benz, the W124 is a very enticing ownership proposition. The whole match was topped off with that genius piece of German engineering, the eccentric-sweep panoramic windscreen wiper, which worked exceptionally well offering the greatest swept area of any car then on offer. So clever, that Koenigsegg still use the idea.

Autocar reviewed the W124 series and wrote, “It is perhaps the most highly regarded variant of perhaps the most widely admired mass-produced car Mercedes has ever made, the W124 series produced between 1986 and 1995, lauded for its bulletproof build quality and timeless design. Which makes this car very important, and one that should be more famous than it is. Classic Cars for Sale went even further with their praise, “After owning a W124, anything else will seem under-engineered.” MotorSport magazine called it, “the best coupé.”

This rare E320 Sportline version was supplied in January 1996 by Monarch Cars Mercedes-Benz of Tamworth and has enjoyed a low ownership. Excellent throughout, and complete with a large history file, original book pack and spare keys, it has also benefitted from recent a large service, new tyres and replaced suspension components. It will be supplied with a comprehensive 12-month warranty included; our E320 Cabriolet is all ready to be enjoyed.