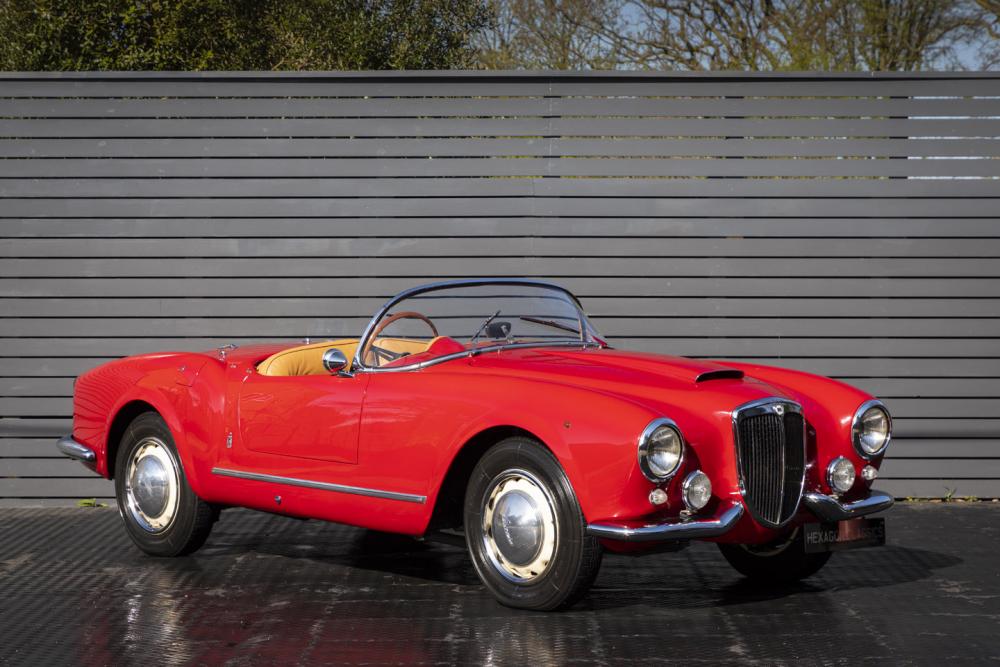 Hexagon Classics are delighted to offer this delightful Lancia Aurelia Spider America B24, which is now widely acknowledged as one of the best-looking sports cars that Italy has ever produced. Lancia provided the platform from which huge levels of innovation were first showcased. Lancia revealed the Aurelia with the world’s first production V6 engine. The car also came with a balanced transaxle gearbox and inboard rear brakes. The car was a post-war revelation and comprehensively placed Lancia back in the running within the global car market.

The result of a desire to produce an open two-seater sports car for the US market was the ‘Spider America.’ The car was styled and built by Pininfarina. The world-renowned coachbuilders took the essence and pre-existing style of the Aurelia and transformed the car into something truly eye catching and exquisite. The Spider “America” was destined to be set apart from the rest. It is a magnificent motorcar to complete a future Mille Miglia in.

Of the 240 examples built, we understand that only 59 were built to Right-Hand Drive specification. Our Aurelia ‘Spider America’ was the 4th chassis sequence motorcar produced. The 1st chassis was a prototype and was subsequently destroyed. Chassis 1002 was the 1st completed and was exhibited at the Brussels Motor Show in 1954.  Italy still drove on the right-hand side of those in those days!

It is understood that this car was the 3rd right-hand drive car manufactured and was supplied new to Formula One Works Maserati / Ferrari Grand Prix driver, Cesare Perdisa.  Perdisa achieved 2 podiums in the 8 races that he participated in. Stirling Moss was his teammate at Maserati, and once borrowed Perdisa’s F1 race car at the Belgian Grand Prix to complete a finish!

This Aurelia Spider America at Hexagon Classics has lived entirely in the warm climate of Northern Italy prior to our purchase of the car.  Just before our ownership, the previous owner carried out a comprehensive refurbishment programme, which included mechanicals, bodywork and interior.

The wonderful history file contains Automotoclub Storico Italiano, Automobile Club D’Italia and Registro Avrella Italiano documentation and a list of Italian ownerships, from 1955 to 2015.  Our Lancia took part in the 2015 Mille Miglia, (entrant No. 375) and is therefore eligible for future historic events.

The Lancia Aurelia Spider is available to view now at our London showrooms.