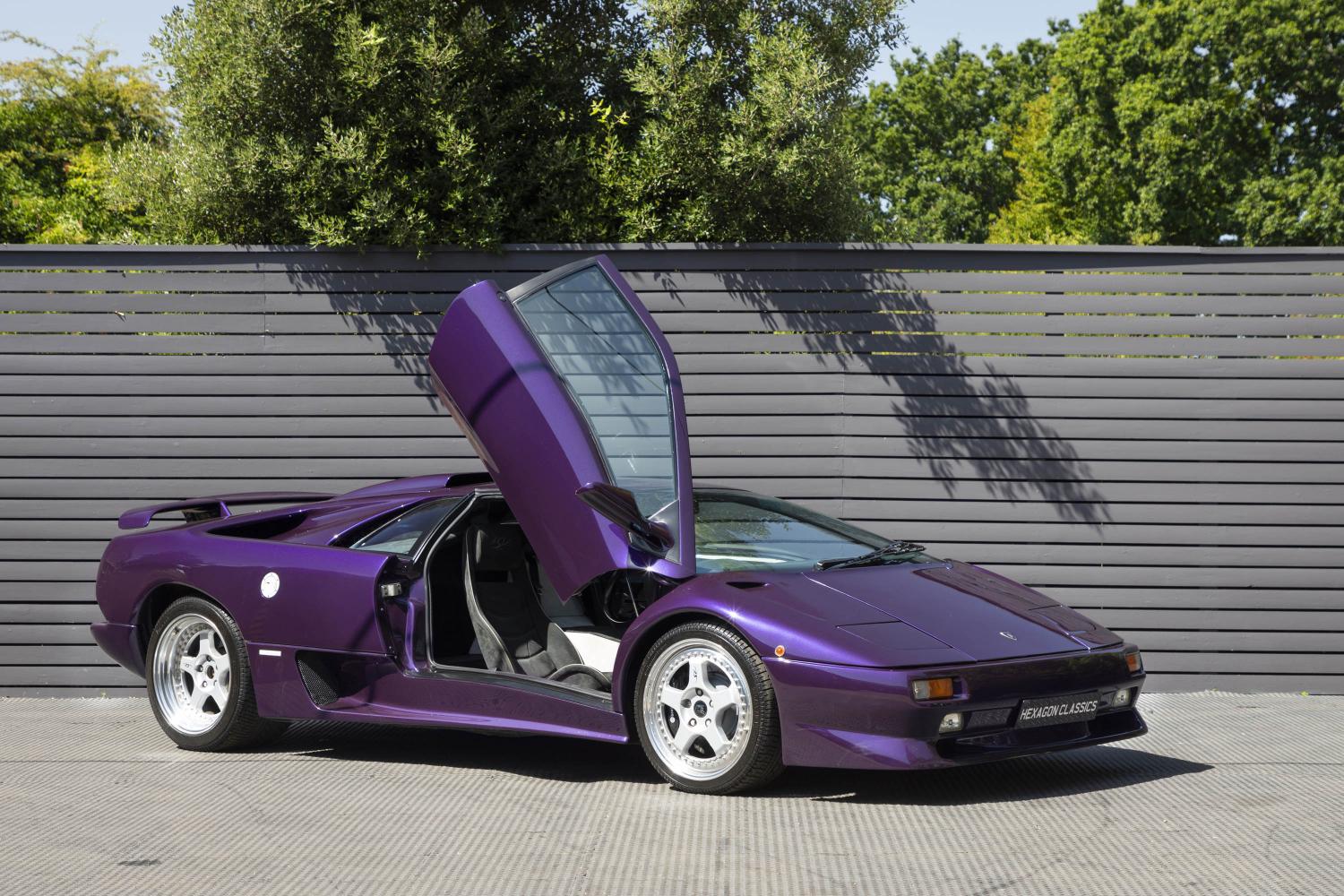 Hexagon Classics are delighted to offer this remarkable Lamborghini Diablo SV, which was finished in stunning Blue Speciale for the manufacturer’s display stand at the Earls Court, London Motor Show in 1996. The vibrant colour bounces from deep blues to almost a purple hue and provides an absolute feast for the eyes. The Diablo has become increasingly sought-after as the market acknowledges its importance as the last Lamborghini before Audi’s steadying influence at the helm.

The Diablo SV model, revived the Super Veloce name for the first time since the Miura SV back in 1973. Lamborghini introduced the SV model at the 1995 Geneva Motor Show, a full five years after the Diablo went into production. It was essentially a more powerful version of the regular Diablo. It had a more powerful V12 5.7 litre engine that produced 510 hp, and 428 lb/ft of torque. The brakes were larger to cope with the power increase. The 0-60 mph acceleration time dropped to just 4.2 seconds.

The Diablo’s interior was a massive departure from the Countach. Not only did it look decidedly more modern, but it also had better materials and a more ergonomic layout. It also looks more organic thanks to the flat and angled dashboard and separate, upright instrument cluster binnacle. It also gained an angled centre console, which has since become the norm in modern supercars.

The Diablo featured fine, hand-stitched materials, fully adjustable seats and steering wheel, electric windows, and a quality audio system. It was also more comfortable to get in and out of thanks to the revised doors that opened wider, while visibility was much improved on the sides and toward the back.

Car Magazine commented, “The Diablo's blistering performance is plain wicked. To slam it through the gears is to goad the devil. Four-shot throbbiness that distinguishes the lumpy idle gives way to a deep-chested bellow of spine-chilling ferocity when you bury the throttle. It's an awesome cacophony of sound that goes beyond assailing the ears; it invades your whole body, as if you're seated at the epicentre of some titanic happening.”

Supplied by Lamborghini London and registered in November 1996, Benefitting from long-term ownership (16 years), this SV has wanted for nothing and boasts a brand new old-stock set of OZ wheels with new Pirelli tyres, Brembo braking upgrades, and a Tubi exhaust. It has benefitted from a recent engine-out service, new clutch, four-wheel alignment, and an air conditioning re-gas. Complete with comprehensive history file, original leather handbook pack, Lamborghini battery trickle charger and spare keys, this is a car ready to be enjoyed.