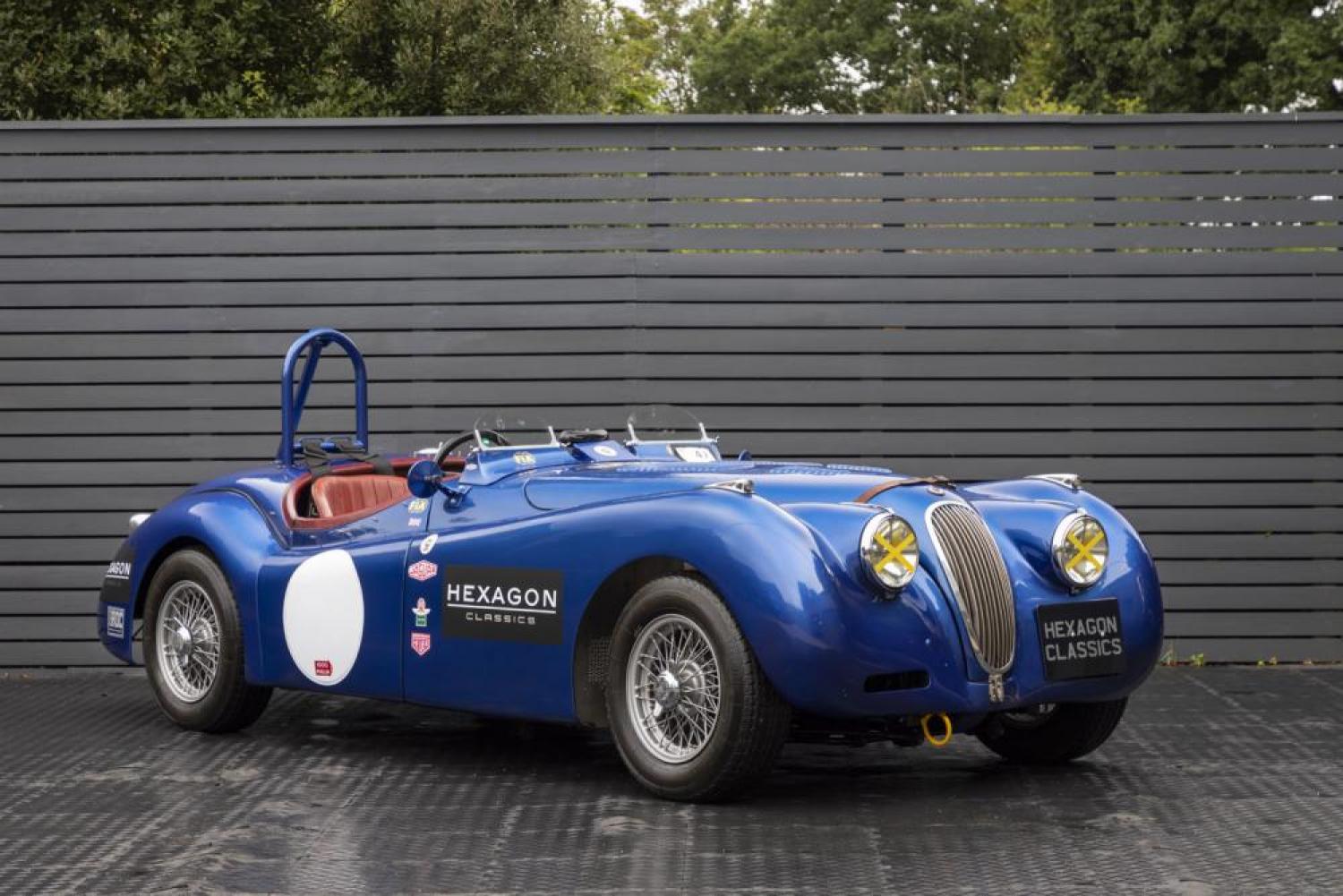 The XK120 was launched in roadster form at the 1948 London Motor Show as a test bed and show car for the new Jaguar XK engine. It caused such a sensation which persuaded Jaguar founder and design boss William Lyons to put it into production. The “120” in its name referred to its 120 mph (193 km/h) top speed (faster with the windscreen removed), which made the Jaguar the world’s fastest standard production car at the time of its launch. To meet demand, it was necessary for the mass-production versions, beginning with the 1950 model year, to have pressed-steel bodies, but retained aluminium doors, bonnet, and boot lid.

The XK 120 was built with racing in mind and the car on offer today here at Hexagon has embraced this philosophy like few others. Chassis number 660469 left the factory in 1951 and has been meticulously maintained it’s entire life. During the cars life it was rebuilt with the much of the work being carried out Jim Tester and Bob Smith of RS Panels. It is one of only six cars built to this specification. Over the last decade, it has been a regular competitor in a vast amount of historic motorsport events with fantastic success and is a well-known car to this day.

The specification on the car is incredibly extensive. The engine is a fully raced tuned 3.8 litre straight six from a MK10. It runs of Mk10 carburettors with E-Type inlet manifolds. This was done as to lower the height of the dashpots. The cam shafts, in order to optimise performance, are from a series 3 XJ6 and help to create a lovely power curve. The car also features and fully stainless-steel exhaust system that it mated to the engine via MK10 exhaust manifolds. In order to compensate for the increased performance provided by the race tuned engine, the car features disc brakes on all four corners. The fronts are four pot vented discs and the rears are from a late XJ6. All four callipers use Mintex competition pads. The suspension is also uprated and race prepared. The gearbox is 4-speed, complete synchromesh gearbox with overdrive.

The car was recently used by Hexagon Classics in the XK70 hill climb at Shelsey Walsh where the car came second driven by Peter Smith. This exceptional Xk120 OTS would make the perfect club racing car or fast road car for the discerning enthusiast looking for a way into classic motorsport and for a car that can be used and enjoyed on a regular basis.