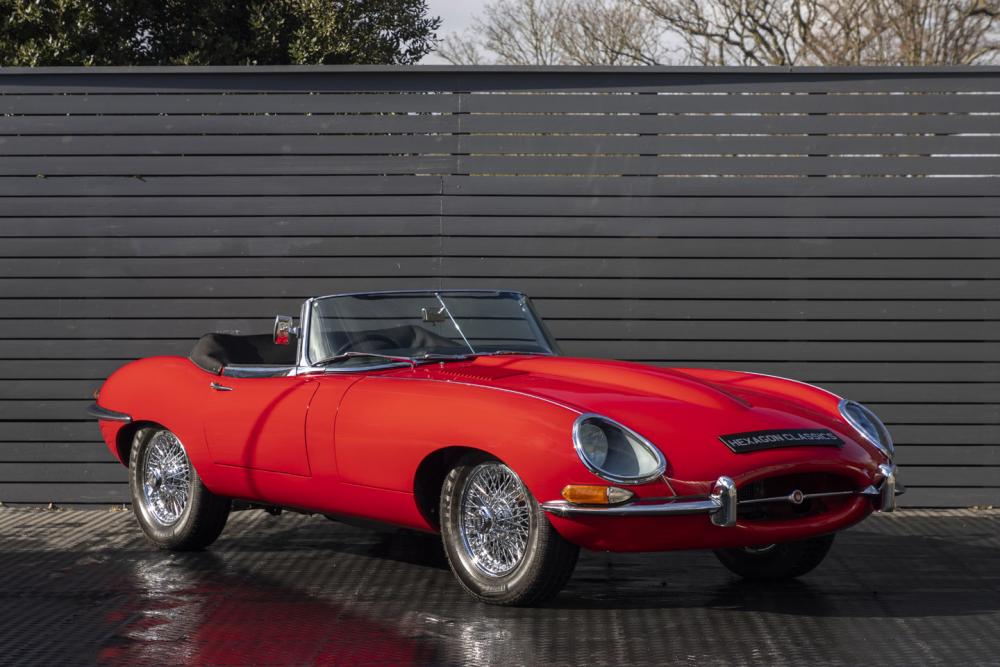 Hexagon Classics are delighted to offer this home-market Series 1 E-Type 4.2 OTS, which has been the subject of significant expenditure by Jaguar marque experts. This is understandably the Jaguar purists’ favourite incarnation of the beloved E-Type sports classic.

The E-Type was a sensation from the moment it was launched. Few could believe a car this pretty was British – it had to be Italian, surely? And, of course, it went like a rocket and was priced at a just-about-accessible-dream price of £2,000. The E-Type was remarkable. It was a result of the mathematical and engineering talent of Malcolm Sayer and became the first large-scale production car based on aircraft principles.

Jaguar E-Type test driver Norman Dewis later commented, “”Sayer had his own way of designing, he’d have an 8ft foolscap sheet covered in different coloured lines and figures. We did the testing first in the wind tunnel but we found a slight discrepancy between those results and what you get on the road. So, we called in at a wool shop on the way to the test track, and stuck four-inch lengths of wool to the car.” What followed was a revolutionary design.

An open-top sports with a front mounted engine, the Jaguar E-Type 4.2 S1 OTS delivers its power through the rear wheels. The 6-cylinder, double overhead camshaft naturally aspirated powerplant has 2 valves per cylinder and a volume of 4.2 litres. The power and torque figures of 265 bhp (269 PS/198 kW) at 5400 rpm and 385 Nm (284 lbft/39.3 kgm) at 4000 rpm respectively. This power is delivered to the wheels through a 4-speed manual gearbox. The claimed weight at the kerb is 1232 kg.

With most of the production being exported, these UK home-market cars are always highly sought after. Supplied by Henley’s, London, our car was restored by Jaguar experts in 2010, and it even has Sir Stirling Moss’s original signature on the air box! It has received considerable recent care from Jaguar marque experts, including a carburettor overhaul and a radiator re-core. This E-Type Series I is ready to be enjoyed.