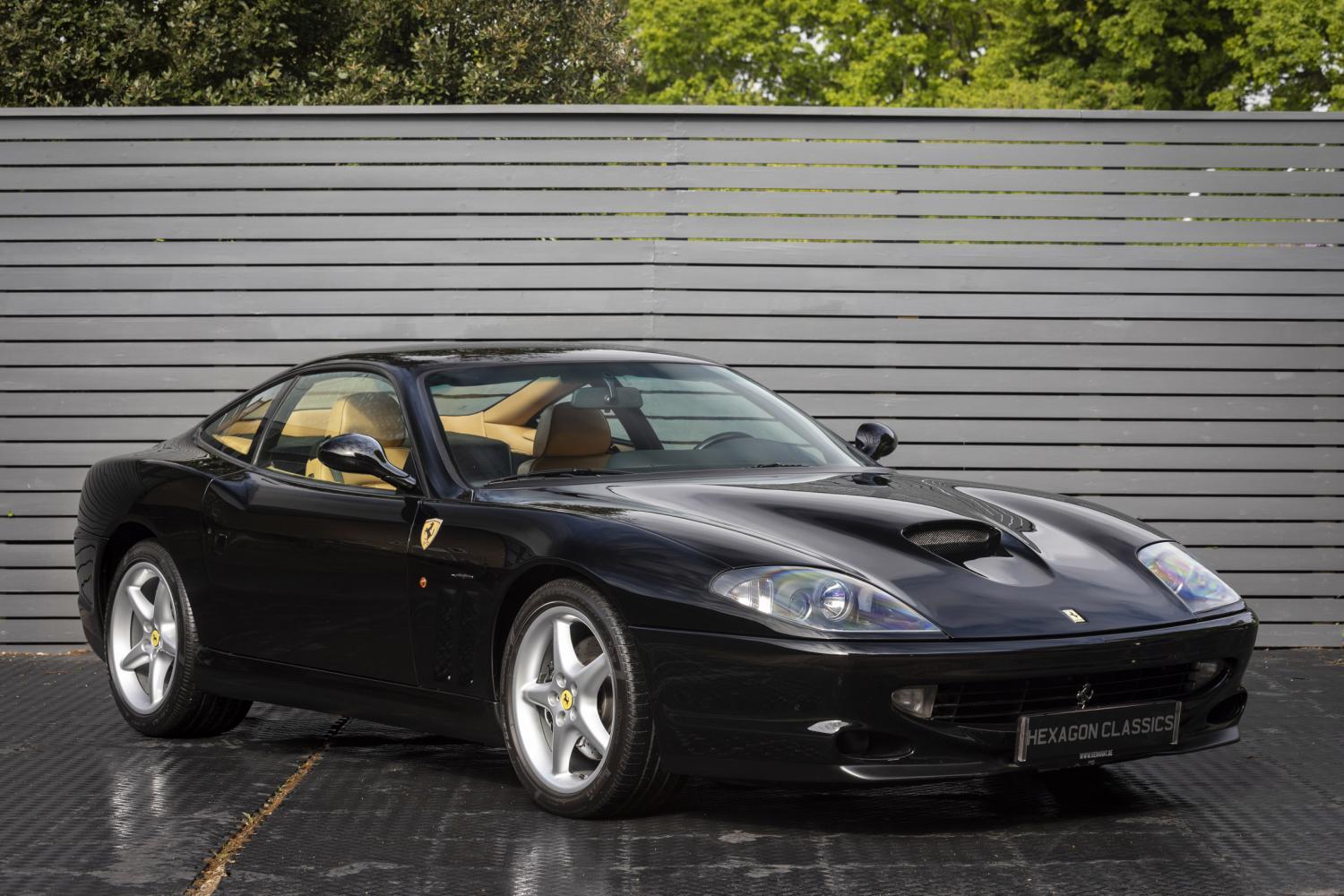 Hexagon Classics are delighted to offer this quite stunning Ferrari 550 Maranello for sale.  After over two decades of Ferrari production with a mid-engine model as the performance pinnacle of the regular production range, the tables were turned in 1996 with the introduction of the 550 Maranello. The new model had a front mounted engine like its 456 GT stablemate and had been developed from the technological progress and innovations of that model, to produce searing performance allied to impeccable road manners.

The 550 Maranello made its public debut at a major Ferrari gathering at the Nurburgring, Germany, in July 1996, which centred round the launch of the new car. The then current F1 team drivers Michael Schumacher and Eddie Irvine were on hand to put the car through its paces on the track, along with a host of previous Ferrari team drivers including former Ferrari World Champions Niki Lauda and Jody Scheckter.

Launched to the press at the Nürburgring in 1996, the 550 Maranello was Ferrari’s answer to those who believed the performance of a front-engined V12 car could not beat that of a mid-engined sports car. The successor to the F512M, the 550 Maranello proved quicker and, thanks to its better front-engined, rear drive packaging layout, far more practical. Its V12 has twin overhead camshafts per bank, four valves per cylinder, with a Bosch Motronic M5.2 injection system.  Power output is 357 kW (485 hp) at 7000 rpm, and maximum torque 569 Nm (58 kgm) at 5000 rpm, and the acceleration time from 0-100 km/h is just 4.4 seconds.

The 550 Maranello also benefited from Ferrari’s maniacal attention to aerodynamics with a low Cd (0.33) and constant downforce over both axles. The combination of uncompromising performance and aerodynamic efficiency helped the car establish new production car speed records on the 12th of October 1998 in Marysville, Ohio, covering 100 km (62 miles) at an average speed of 304.1 km/h, (188.88 mph) and 296.168 km/h (183.955 miles) in one hour.

The body lines from the pen of Pininfarina unsurprisingly had echoes of the new model’s 2+2 stable mate, the 456 GT, in the overall premise. However, there were also retro hints from earlier classic models, like the twin exhaust air slots in the front wings akin to those of the sixties 250 GTO and 275 GTB, whilst the tail light treatment was even closer to that of the fabled 365 GTB/4 “Daytona” model than it had been on the 456 GT.

Supplied by Al-Tayer Motors LLC, this 550 entered the UK soon afterwards, and the history file shows that it has benefitted from a comprehensive regular servicing schedule with Ferrari main dealers and marque specialists.  Available to view now at our London showrooms.