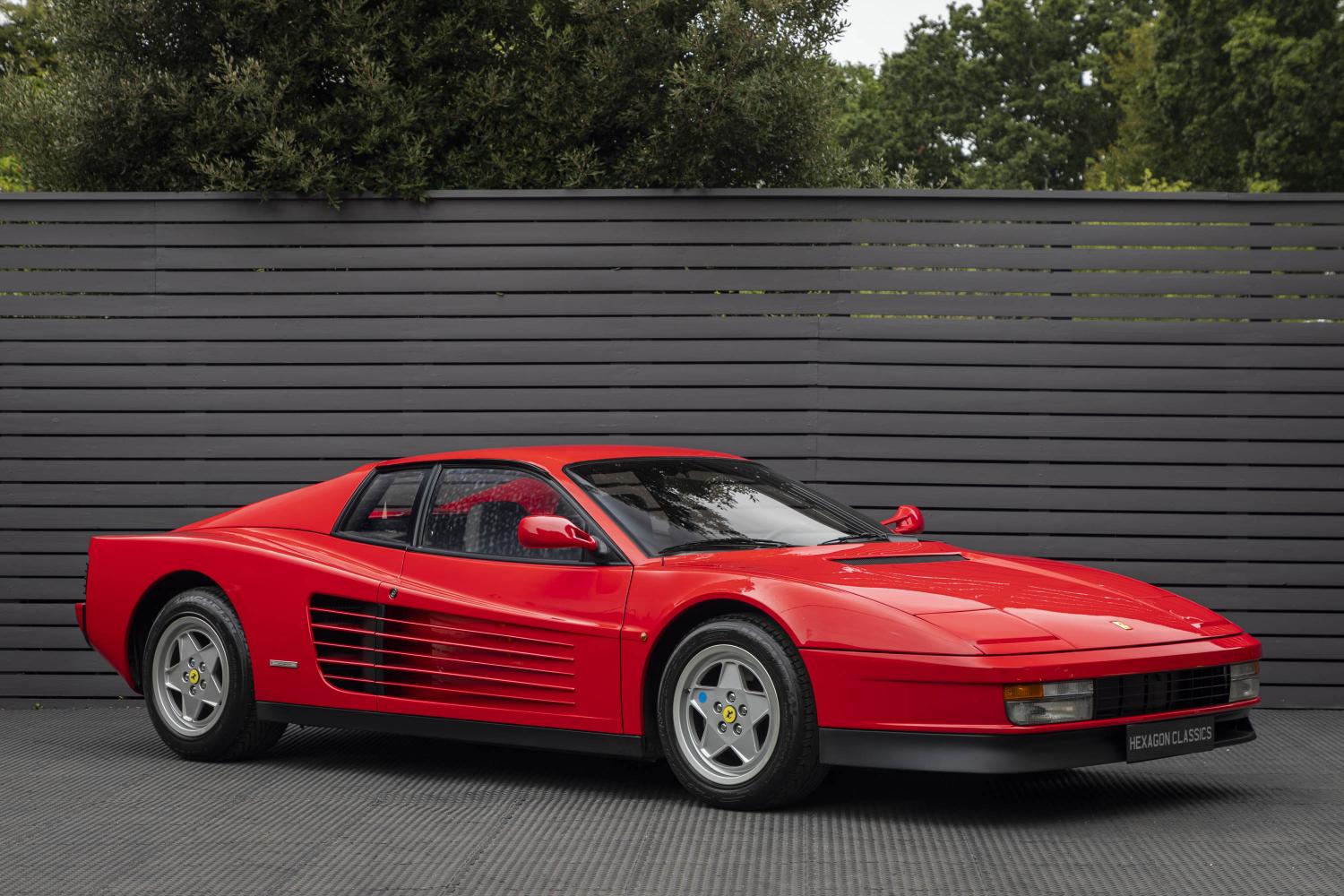 Hexagon Classics are delighted to offer this very special Ferrari Testarossa in the classic colourway of Rosso Red with Nero Hide interior.

The Paris Motor Show in October 1984 saw the return of the glorious Testarossa as heir to the 512 BBi. Pininfarina’ s design broke somewhat with tradition and was striking and innovative. The front wings flowed into one of the models most distinctive styling features, the deeply-straked door panels that grew in width towards their trailing edge, before blending into very wide rear wings. The side intakes were larger than on the previous model and this constraint saw the introduction of the long side strakes that would become the Testarossa’ s most recognisable feature.

The name Testa Rossa is Italian for Red Head and refers to the colour that the camshaft covers were painted on the sports racing models. Naturally the modern bearer of the name followed suit with red painted camshaft covers. It made its debut in the glittering surroundings of the Lido nightclub on the Champs Elysées in Paris, on the eve of the 1984 Paris Salon, where invited press and guests were given a gala preview prior to its public launch the following day. The evolution of the 12-cylinder boxer engine saw it equipped with four valves per cylinder: the most powerful engine mounted on a production sports car at the time of its launch.

The Testarossa was a model that took its name from the company’s history, being derived from the successful 500 and 250 Testa Rossa series of sports racing cars from the late fifties. It had twin belt driven overhead camshafts per bank, now driven directly off the crankshaft instead of via idler gears on the earlier Boxer models. The dry sump engine was longitudinally mounted in unit with the five -speed transmission, in a very similar manner to that of the preceding Boxer series. It was fitted with a Marelli Microplex MED 120 B electronic ignition system and Bosch KE-Jetronic fuel injection, to produce the 390bhp @ 6300rpm for European models.

Supplied new by Zender Exclusiv-Auto, Germany on 16th May 1989, the history file boasts the original order form and dealer correspondence. The first owner, who had the car for 20 years, routinely registered the car for use only in the summer months and professionally stored the vehicle over the harsher winter months. The consequence of such selective driving resulted in a very low mileage of 1,862 miles by September 1995, when the Testarossa was stored again for Winter – this time, resulting in professional storage until May 2009. Following its 20-year tenure with its first owner, the Testarossa was recommissioned by Straub’s and sold to its next owner, who in turn, added very little to the odometer. The Ferrari was then sold and joined one of Europe’s significant car collections in May 2012. This classic Ferrari Testarossa is supplied with its original order forms, registration document, leather driver’s book pack, spare keys and tools. Available for viewing at our London showrooms.