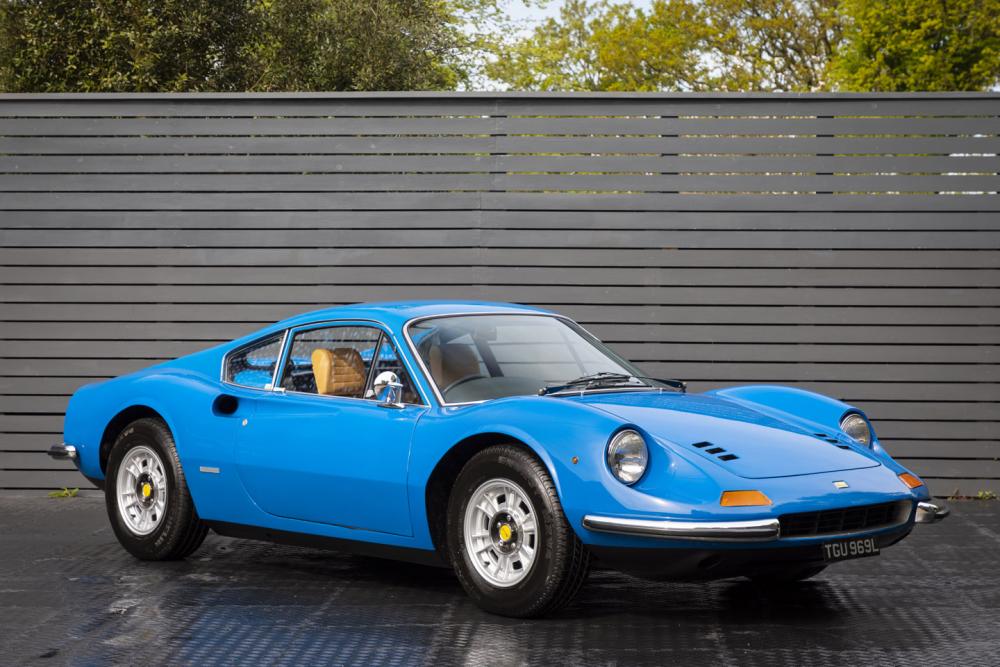 The 246 GT Dino was first produced in 1969 and was the replacement for the 2.0 – litre 206 Dino of 1967. Along with the engine in the new 246 GT Dino being increased to 2.4 – litres, the wheelbase was also extended. Despite the slight gain in weight incurred because of the longer wheelbase, the new engine provided more than enough extra performance to move the new car leaps ahead of its forebearer.

The engine itself is something of a delight. The transversely mounted V6 featured quad overhead cams and was now capable of producing 195bhp. Despite the engine being increased in size, much of the power gain over the previous 2.0 – litre engine was created by the cylinder block now being made of cast iron rather than aluminium. This fantastic new powertrain was complemented by the styling to match. The steel body was styled by legendary design house, Pininfarina and is simply stunning from all angles.

The car on offer here today, chassis number 05206 is 1 of only 488 right hand drive cars produced. Along side being presented in fantastic condition, the car is complete with the correct matching numbers engine and gearbox.

In 2017, a complete Massini report was produced where the history of our car was detailed. The car was completed by the Factory on the 31st October. In November 1972, the car was delivered to the well-known Colonel Ronnie Hoare’s Ferrari Concessionaires, Maranello in Egham, Surrey. From there, the car was sold to North Worcester Garage where it was first registered on UK number plates, RWP 5L. In March 1973, the car was once again traded to Halesowen Jensen Garage who sold the car to its first private owner, Mr Ronald Strasser of Birmingham. Mr Strasser kept the car in the UK until 1979 when he decided to export the car to Brisbane, Australia. The car remained under the ownership of Mr Strasser for more than 15 years. In 2002 the car was sold to Neil Brown via Trevor Bassett. Mr Brown enjoyed the car immensely for a time period of 12 years before the car was sold to its final owner in Australia, Terry Healy’s Autombilli Rapide P/L in Mooroka, Queensland. We here at Hexagon Classics imported the car back to the UK in 2015.

Prior to the car returning to the UK, extensive re-commissioning work was carried out. All invoices and details of the work carried out are comprehensively detailed in the cars history file. One of the main benefits of the car spending time in Australia, is that the car has always been located in a dry climate which has helped greatly in keeping the car immaculate.

Included in the sale of the car are the original Ferrari woven wallet, original handbook and original tool roll. Alongside these items, the car is also complete with its original warranty card which is an extremely rare piece of history to still be with the car.  All these items that were supplied new with the car just go to further reinforce how original and special the car is.

This is a fantastic opportunity to acquire a very rare original RHD, UK supplied car that is presented in the outstanding colour combination of Azzuro Blue with Beige interior. This is surely an opportunity that cannot be missed, and the car is available for immediate viewing at our London showroom.