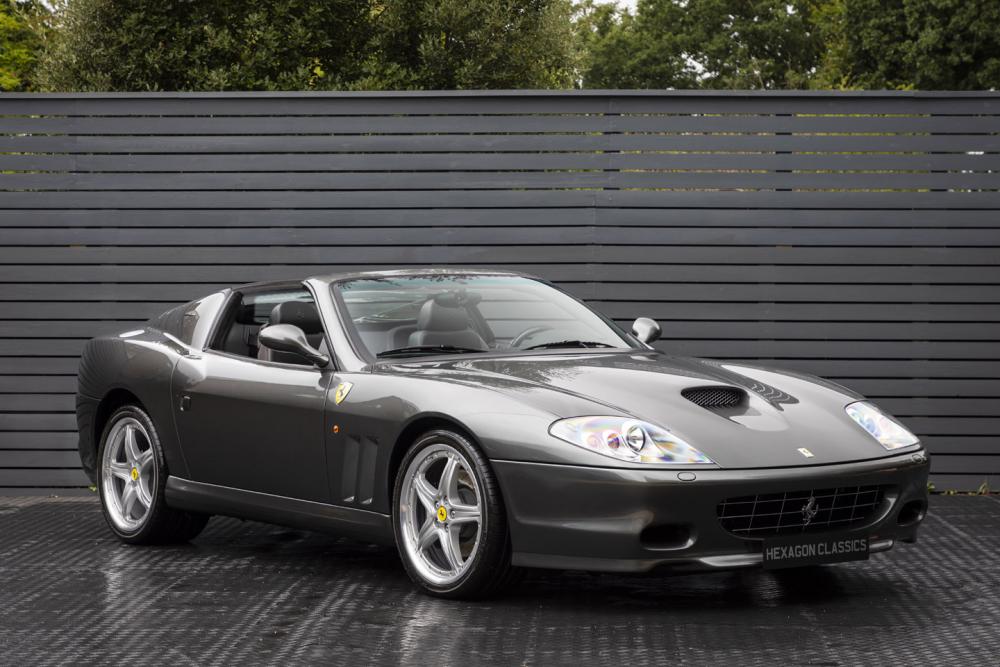 Hexagon Classics are very pleased to offer this ultra-low mileage Ferrari 575 Superamerica. The exclusive and unmistakably Pininfarina-designed Superamerica is named after a very famous series of limited edition 12-cylinder models built by Ferrari between 1956 and 1961.

Introduced in 2005, the Ferrari 575M Superamerica is a convertible version of the 575 Maranello; it features an electrochromic glass panel roof which rotated 180° at the rear to lie flat over the boot. The patented Revocromico roof incorporates carbon fibre structure that is hinged on a single axis with a luggage compartment lid, allowing the access to the latter even with an open roof.

When the top is closed, the opacity of the glass in the roof can be adjusted via a dial in the cabin. The driver and passenger can either experience the full brightness of a conventional sunroof at its lightest setting, or 1% of available light at its darkest. Furthermore, the Superamerica can be transformed into a convertible at just a press of a button, with the roof rotating back to rest flush with the boot lid in just 10 seconds, leaving the rear window in place to function as a wind deflector. Of course, this does not obstruct luggage capacity, and the Superamerica’s boot swallows up more than enough luggage for two on a weekend getaway with the top up or down.

With the roof open the rear window, apart for holding the third stop light, also acts as a wind deflector. This roof design was previously used on the 2001 Vola concept designed by Leonardo Fioravanti. The Superamerica uses the higher-output tune of the V-12 engine, F133 G, rated at 533 HP (397 kw; 540 PS) and Ferrari marketed it as the world’s fastest convertible, with a top speed of 199 mph (320 km/h)! A total of 559 Ferrari Superamericas were built; this number followed Enzo Ferrari’s philosophy that there should always be one fewer car available than what the market demanded. Supplied new by Scuderia Berlin Ferrari in October 2005, the car is now registered in the UK, and is serviced up to date. Treated to a professional ceramic coating, this car was also the winner of the Platinum Certificate of Achievement at the FOC National Event in July 2017.