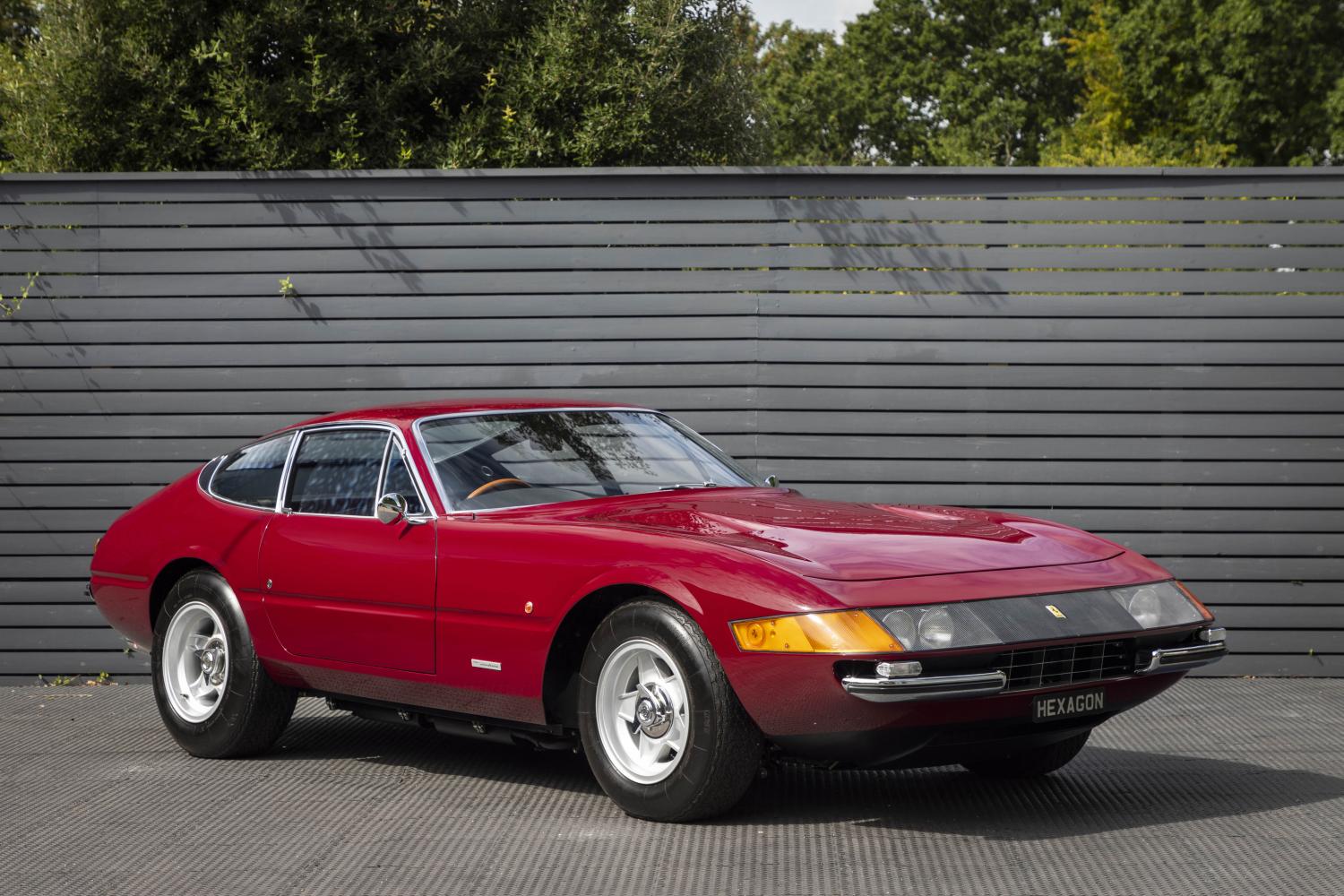 Hexagon Classics are delighted to offer this Ferrari Daytona 365 GTB / 4.  Built in 1971, Chassis number 13931 is a rare ‘Plexiglass’ nose example and is one of just 36 original UK RHD models built by Ferrari and imported to the UK. It is unknown exactly how many of these models remain in the UK today. Our example carries Ferrari Classiche certification and  is an international concours winner.

The first owner was a Mr. Peter Stubberfield of Berkshire, who was Chairman of the Ferrari Owners’ Club from 1970 until 1988 and he purchased the car directly from Maranello Concessionaires. He owned the Daytona from January 1971 to February 1983, accruing some 33,000 miles during his ownership, and always ensured that the car was also maintained and serviced by Maranello Concessionaires.

The second owner kept the car for only eight months and added just over 1000 miles to the Daytona’s odometer.

The third owner was a renowned entrepreneur who had sold his DIY retail chain to B&Q just two years earlier. Over the next four years, this gentleman drove the Daytona 1,400 miles before subjecting the Ferrari to an extensive restoration in 1988. GTC Engineering in Northamptonshire carried out the restoration. The history file includes a comprehensive invoice record and period photographs of this work and the Daytona was then put away to admire rather than use.

The fourth owner purchased the car in May 1999, and he owned it for six years, during which time he added approximately 3000 miles to the odometer. A fifth owner acquired the car in June 2005 and completed a gearbox and diff rebuild. Another 4000 miles was added to the car, simply proving what a joy the car was to use, and not just to own!

In 2012 the car was exported to Japan on behalf of an ardent collector and there is documentation outlining an extensive rebuild of the suspension, overhaul of the braking system, fitment of a new fuel pump and renewed electrical components from a workshop in Tokyo.

In 2015 Foskers Engineering repatriated the car back from Japan on behalf of the current owner and were commissioned to restore the car back to its original glory, with no expenses spared, so as to compete at International Concours events.

The car underwent a bare-metal repaint back to its original colour of Rosso Bordeaux, as well as a total mechanical rebuild and an extensive detailing process. There is also progressive electric power steering and a light hydraulic clutch added to the car making it easy and a joy to drive.

As such the car won in the great V12 category at Salon Prive Concours de Elegance in 2016.

There is an outstanding history file for this car and the clock now shows 44,000miles.

The car also retains the original Ferrari leather pouch, owner’s handbook, blue log book, warranty card and crucilally even the  original order from Maranello. Seeing is believeing and this car is truly in outstanding condition.