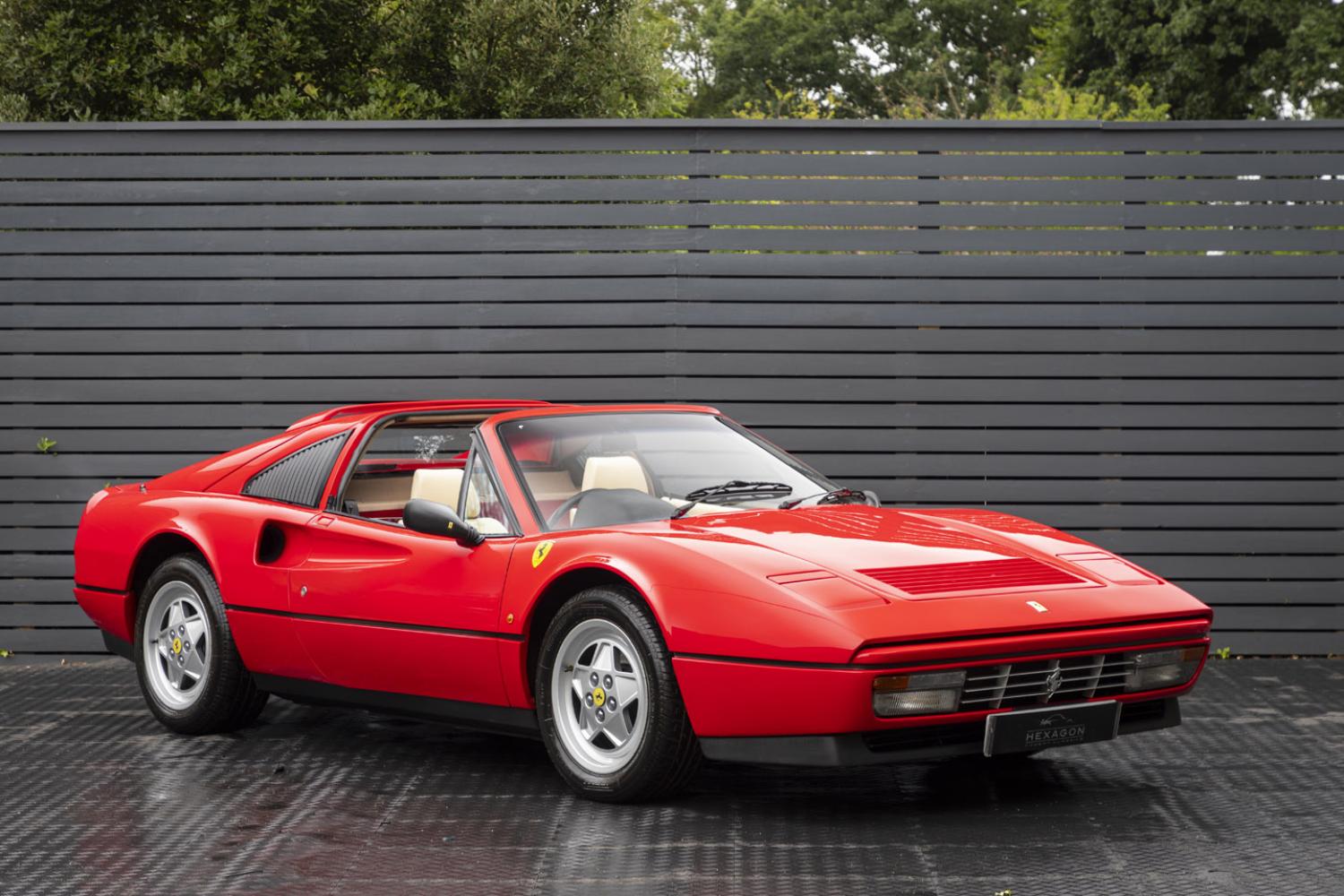 Hexagon Classics are delighted to offer the very last Ferrari designed under the stewardship of Enzo Ferrari, and is the epitome of Italian elegance. The body of the 328 designed by Pininfarina, was largely inherited from its 308 predecessor, and was the last step in the development of the handsome two- seater series with an aspirated transverse V8 engine.

Thirty years on, it remains one of the most beautiful ‘modern’ Ferraris – and probably one of the most sensible, too. Fire up this mid-mounted V8 and there are no theatrical throttle blips, only when you approach its 7,700rpm red line does this engine sound very special.

The model name 328 refers to the cylinder capacity (3.2 litres) and the number of cylinders (8). GTS stands for Gran Turismo Spyder, the Targa version of this mid-engine, two seat sports car. The car was more of a Targa than a spider, with its removable roof.

The 328 used a 3.2-litre development of the 3.0 quattrovalvole (four valves per cylinder) V8 from the Ferrari 308, with the cylinders are at a 90-degree angle. The 328 engine retained the Bosch K-Jetronic fuel injection system of its predecessor, but was fitted with a Marelli MED 806 A electronic ignition system.  Maximum power was 274hp at 7,000rpm, while peak torque was 224lb/ft at 5,500rpm. In a car weighing a modest 1,325kg, that meant 0-60mph acceleration in 5.5 seconds and a top speed of circa 163 mph.

The car stands less than 1.12 metres high. Notable style elements are the air slots starting in the doors all through the rear screens. The ‘wings’ from the rear window to its rear are also a characteristic. The 328 model presented a softening of the wedge profile of its predecessor, with a redesigned nose that had a more rounded shape, which was complemented by similar treatment to the tail valance panel. The revised nose and tail sections featured body colour bumpers integral with the valance panels.  The interior trim also had a thorough overhaul, with new designs for the seat panel upholstery and stitching, revised door panels and pulls, together with more modern switchgear, which complemented the external updating details. Ferrari’s open-gate manual gearbox looks timelessly cool.

This right-hand drive example with ABS is an original UK-supplied vehicle by H.R. Owen Ferrari, (one of just 292 UK RHD cars), and has been cherished by its former owners. It has an excellent history file with numerous invoices and comes complete with original books, spare keys and tools. A recent full service, belt change, and air conditioning re-gas has recently been carried out. This is a wonderful opportunity for the collector to secure an original low mileage, UK-supplied car.  Available for immediate inspection at our London showrooms.