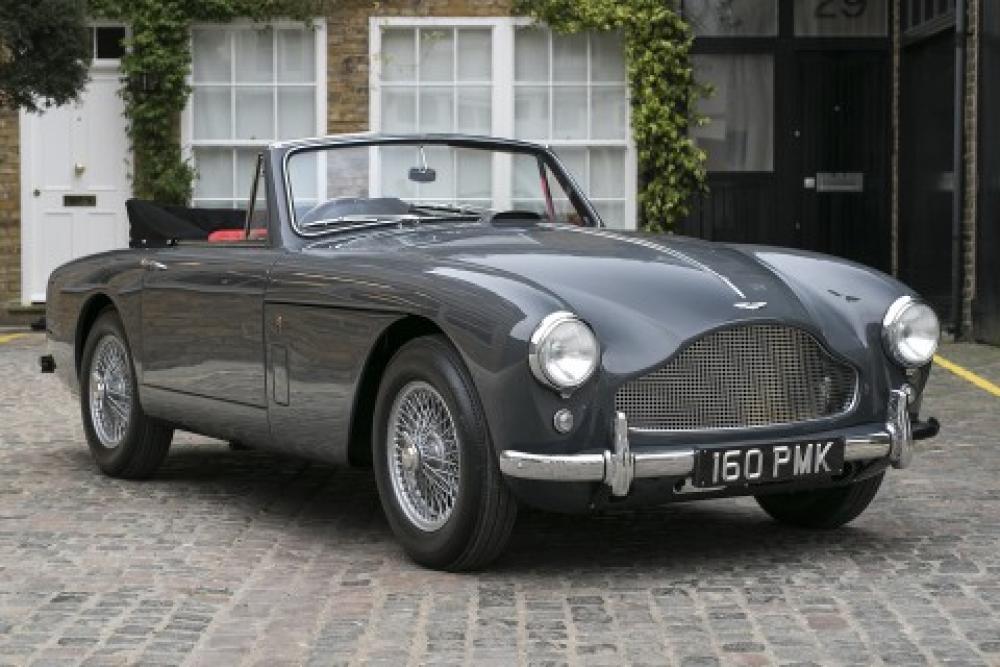 The landmark DB models of the 1950’s are considered by many marque enthusiasts to be the first true post-war Aston Martin model produced. The ultimate and most highly-refined variant being the DB Mark III which was introduced in March 1957 and produced in both Fixed-Head and open Drop Head Coupe. The ultimate variant being the Drop Head Coupé, with only eighty four cars ever produced making it one of the most sought after convertibles ever built by Aston Martin.

Styling and body fittings were updated, most notably with a revised grille opening inspired by the famed DB3S sports car, this new grille of the DB Mark III influenced Aston Martin styling for many years to follow, with this now-iconic basic design cue providing unmistakable brand continuity and essentially remaining in effect through the V-8 models of the late 1980s. Among the many other updates of the Mark III, a revised instrument panel designed by Frank Feeley echoed the grille’s shape and now relocated the gauges directly in front of the driver. In popular culture, while the later DB5 is most often associated with Her Majesty’s Secret Agent James Bond, Ian Fleming the creator of James bond actually had 007 driving a DB Mark III.

A 1959 review by Road & Track magazine praised the car for everything but its US $7,450.00 “A car for connoisseurs” they called it. “The Aston has many virtues and few faults”

Our car, Chassis AM300/3/1461, was manufactured in March 1958 & commissioned to be built in Deep Blue Grey with Connolly VM8300 Red Hide. The specification included the all-important additional equipment of an overdrive unit, Alfin Drum rear brakes & front discs – exactly the same specification as it is presented today.

Supplied by Brooklands of London to the Associated Press, presumably for the use of their then chairman Mr Roy Thompson. On Hexagon Classics acquisition, we commissioned marque specialists to complete a “body off” 100 point restoration that included a complete engine rebuild, which that alone cost in excess of £50,000.00!

The historical chassis file accompanying the car consists of:

This ultra-rare Aston Martin Mk111 Drop Head Coupé which is one of only eighty four cars ever produced and presented in concours condition throughout.
In our opinion the DB Mark III is the ultimate development of the ground breaking DB2 series which saw Aston Martin develop from a small specialist manufacturer to a marque of worldwide renown. These cars provided the basis for Aston’s brilliant racing successes culminating in the 1959 World Sports Car Championship. Though marque connoisseurs have always appreciated them, the regard for the DB Mark III has risen significantly in recent years. Its stature in today’s market is supported by its technical sophistication, excellent performance and eligibility for many of today’s most desirable vintage motoring events.