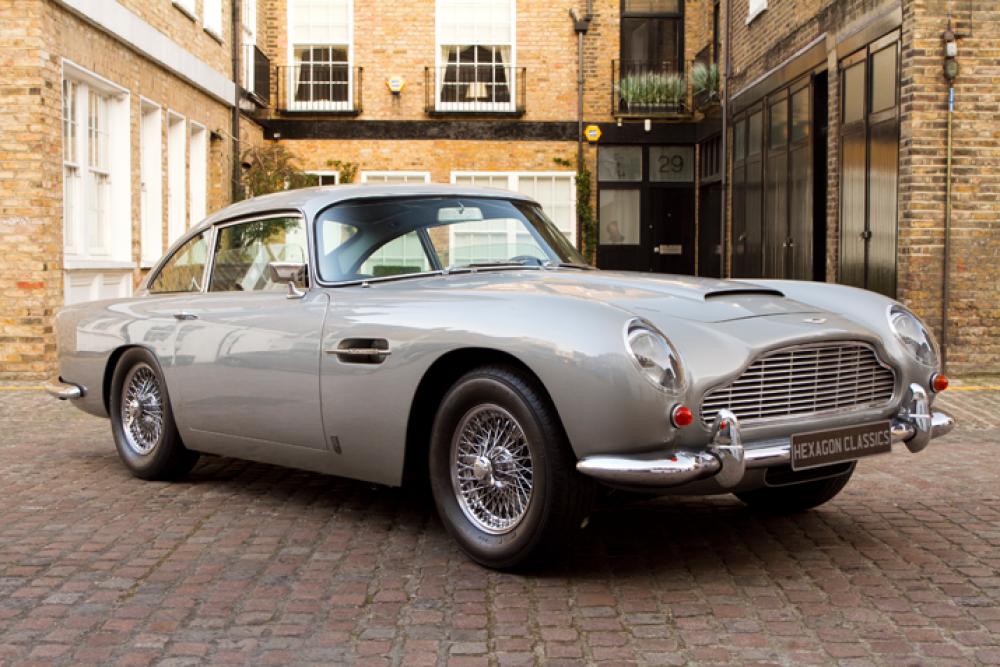 The Aston Martin DB5 is seen by many, including a substantial number of Aston Martin experts, as the most beautiful and desirable car to ever be produced by the marque. The DB5 was a replacement for the DB4 and was first launched in 1963. The car came with notable changes over the outgoing DB4, many of which came under the bonnet. The straight six-engine was enlarged to 4 litres enabling the DB5 to reach a top speed of 145mph. For the first time Aston Martin introduced a fully synchromeshed gearbox. This was a four-speed David Brown S432 gearbox that had optional overdrive. This was later replaced with a five-speed ZF gearbox that was seen to be a vast improvement over the standard David Brown gearbox. Standard equipment of the DB5 was also extensive and included 15” Chromium Wire Wheels and Girling Disc Brakes all round. Inside, the DB5 benefitted from reclining seats, wool pile carpets, electric windows and a full Vamoul leather hide interior. The body for the DB5 was once again built to the Supperleggera patent in the same manner as the DB4 that preceded it.

There is no doubt that the DB5’s appearance in the James Bond film franchise has played a major role in the cult status that the car now possesses. It has helped to turn the car into an icon and cemented the DB5’s place in British history as both a film and automotive great.

DB5 / 1725 / R was initially supplied to Motor Magazine on the 26th of November 1964 for road testing. The car subsequently sold on the 30th November from which its extensive and fascinating history began.

In 1997 the car was restored by RS Williams prior to its participation in the infamous Paris to Peking rally. This was not to be the last time the car entered the Paris to Peking rally, as it was once again entered in 2010. Following the cars return from the rally, it once again went to RS Williams. They carried a detailed refurbishment of the car to correct any issues that occurred whilst on the gruelling rally.

The car is currently coming towards the end of extensive 3-year restoration. All the work has been carried out by renowned Aston Martin specialists, Aston Engineering. The restoration has been a comprehensive nut and bolt endeavour from the ground up as to ensure the quality of the finished article. The complete build has been extensively detailed and features numerous invoices for parts and work carried out.

The engine has been uprated to a 4.7 litre and is running triple SU carburettors. It is mated to the much improved ZF five-speed gearbox. The car is presented in silver metallic paint with black leather interior and surely presents a fantastic opportunity acquire one of the most iconic cars of all time.