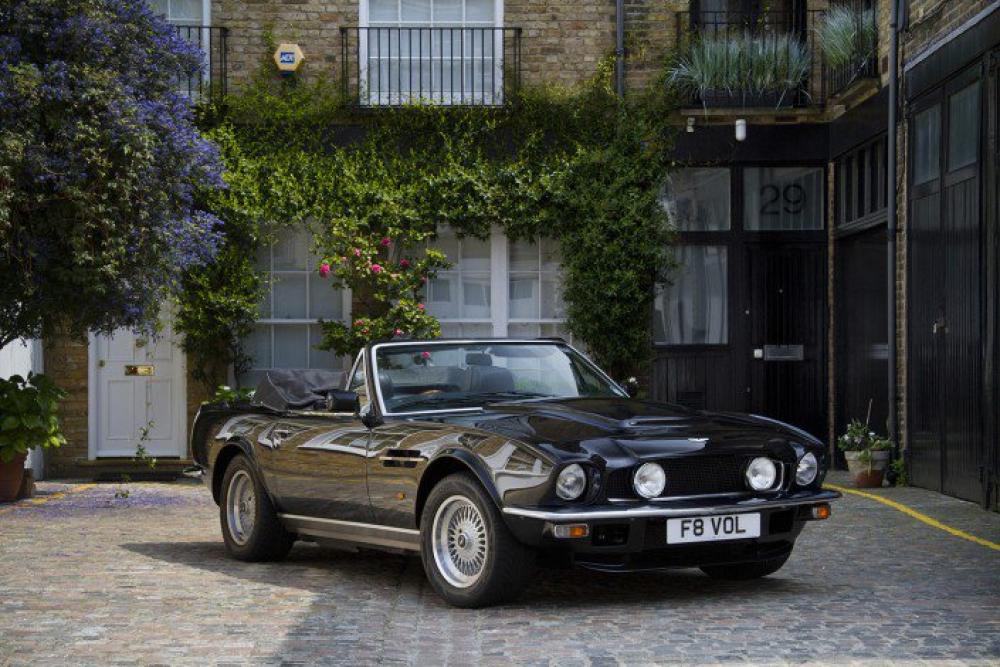 Commissioned to Prince of Wales Specification by Works Service

In 1977 the resurgence of the Vantage name was a welcomed by true Aston Martin aficionados everywhere! The name represented the high-power engine’s variants of previous series of “DB” cars.

Propelling Aston’s V8 back into the supercar league was a tuned version of the existing 5,340cc engine producing an estimated maximum output of around 375bhp. Chassis changes were minimal apart from the adoption of bigger ventilated discs all round and low-profile Pirelli tyres. The Vantage was, nevertheless, readily distinguishable from the standard product by virtue of its blocked-off bonnet scoop, blanked air intake, front chin spoiler and lip on the boot lid. The Volante convertible to Vantage Specification was launched in 1986, in addition to the Vantage Engine upgrade came flared wheel arches, boot spoiler (a feature the Volante had previously lacked) and extended front spoiler, while glass fibre extensions replaced the model’s hitherto characteristic chromed sill covers. The result was a muscular, aggressive-looking car that could justifiably claim to be the world’s fastest convertible!

Not all Aston Martin customers found the new look to their liking however, preferring the more restrained appearance of the earlier model; The foremost among these was HRH The Prince of Wales whom commissioned his new Volante with the Vantage engine but without the added cosmetic features of the X Pack, effectively a standard looking specification for many the ultimate Aston Martin Convertible; The Vantage Volante to “Prince of Wales” Specification drawing uniquely from the best of the Volante and Vantage features.

Our VantageVolante was supplied new to Mr Ivor Silverstone, the world famous Bentley Collector, he specified the car to be built in Cannock Black. Due to the high demand for the Vantage Volante at that time it appears that he re sold his car prior to taking delivery for 35% premium to list…

In June 2003 at 28,006 miles, the car was sent to Aston Martin Works Service for full engine rebuild and conversion to “Prince of Wales” Specification (while retaining the boot spoiler) at a cost of £70,047.00 (invoices on file). Continued expenditure was carried out on the car to keep it in perfect order. The last owner acquired the car in 2008, RS Williams Ltd carried out preparation to the Aston Martin and have maintained it ever since ; the car has covered less than 200m since maintenance works were completed by.RS Williams Ltd

A unique opportunity to acquire such a rare and interesting Aston Martin that has covered only 30,632 miles with its comprehensive chassis file.