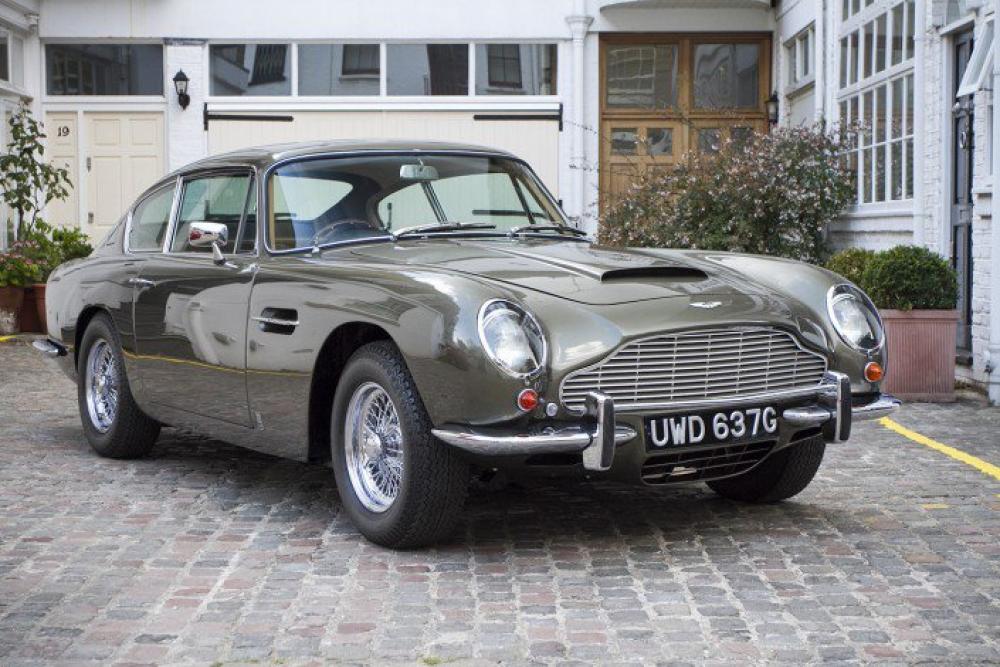 Chassis Number DB6/3505/R Engine Number 400/3760/VC
Correct Matching Numbers Rare & Original Factory Vantage Engine
The culmination of Aston Martin’s long-running line of ‘DB’ six-cylinder sports saloons, and thus considered by many to be the last ‘real’ Aston, the DB6 was introduced in 1965, updating the DB5. Although recognisably related to the Touring-styled DB4 of 1958, the DB6 abandoned the Superleggera body structure of its predecessors in favour of a conventional steel fabrication while retaining the aluminium outer panels. Increased rear-seat space was the prime DB6 objective so the wheelbase was now 4″ longer than before, resulting in an extensive restyle with more-raked windscreen, raised roofline and reshaped rear quarter windows. Opening front quarter lights made reappearance but the major change was at the rear where a Kamm-style tail with spoiler improved the aerodynamics, greatly enhancing stability at high speeds. These many dimensional changes were integrated most successfully, the DB6’s overall length increasing by only 2″. Indeed, but for the distinctive Kamm tail one might easily mistake it for a DB5.
‘The tail lip halves the aerodynamic lift around maximum speed and brings in its train greater headroom and more luggage space,’ revealed Motor magazine, concluding that the DB6 was one of the finest sports cars it had tested. ‘The DB6 with its longer wheelbase and better headroom makes an Aston Martin available to the far wider four-seater market, and the design is in every way superior to the previous model. A purist might have thought that the longer wheelbase would affect the near-perfect balance of the DB5, but if anything the DB6 is better.’
The Tadek Marek-designed six-cylinder engine had been enlarged to 3,995cc for the preceding DB5 and remained unchanged. Power output on triple SU carburettors was 282bhp, rising to 325bhp in Vantage specification. Borg-Warner automatic transmission was offered alongside the standard ZF five-speed gearbox, and for the first time there was optional power-assisted steering.
Motor clearly appreciated the power and poise of their test Vantage: ‘In an effortless way that few other cars can match, the DB6 makes an overall speed limit of 70mph look quite ridiculous. At its maximum speed of more than twice this, it is reassuringly stable, probably more so than many cars struggling to maintain their 70mph convoy speed. If you need to stop from high speed the brakes are outstandingly powerful, a point which really needs remembering if there is a less well-endowed vehicle behind; and the handling in both wet and dry conditions is superior to all but a couple of the production two-seater sports cars we have tested.’
It is an irony that, having brought the original DB4 concept to perfection in the form of the DB6, Aston Martin chose to change direction with the larger DBS and successor V8-engined models. Today the accomplished DB6, despite being the most evolved and practical of the original DB family is also, somewhat paradoxically, the most affordable.
This DB6 Vantage was originally a factory demonstrator, first registered ‘FKX 3G’. Registered under a cherished number by its first private owner, George Higginson & Sons, the Aston was reregistered ‘UWD 637G’ when it was traded in for another demonstrator (see AML correspondence on file). Two further owners followed before the vendor’s late father acquired the car in April 1974. The DB6 comes with Aston Martin service records for the period 1968 to 1975, numerous receipts relating to maintenance carried out over the year’s of which one of the most recent relating to a front suspension rebuild in 1993 and a quantity of expired MoTs. Spanning the period 1971 to 2007, these 31 certificates show only a minimal mileage covered annually in the latter years, probably confined to driving the car to the MOT station and back again. The mileage total when the last certificate was issued in July 2007 was 71,742 miles, and the car has been SORN’d since 2005.
Our Concours prepared DB6 Vantage was commissioned to be built in Olive Green Metallic with contrasting Connolly Natural Hide, the specification the car is presented in today.
The Factory built options included: