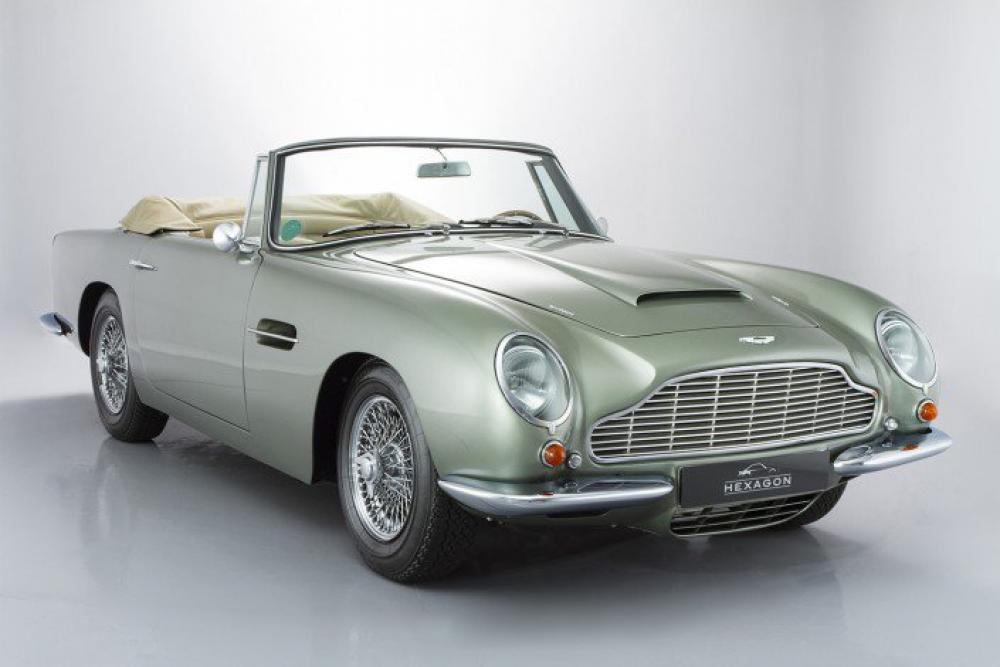 Chassis No: DBVC-2325-R
One of Only 37 Cars Ever Produced
Short-Chassis Volante is the rarest of all DB model convertibles as only 37 in total were ever built it is often mentioned in Aston Martin texts and enthusiast’s guides as one of the most interesting and collectable of all the Aston Martin DB Series. It is also the first ever Aston Martin to wear the now world famous “Volante” moniker that has been used on every convertible Aston Martin since.
The image of this quintessential British GT car is exemplified most aptly with the legendary Aston Martin DB series of sports cars, especially in glamorous open-air convertible form. As production of the new Aston Martin DB6 was heralded by the display at the London Motor Show in October 1965, an initial batch of 37 convertible models was initiated on the last remaining shorter chassis of the outgoing DB5. These were christened simply ‘Volante’ by factory man Kent Monk, meaning literally “flying” and marking the first such Aston to carry this nomenclature.
Although they were built and marketed alongside the contemporary DB6s and embodied all the DB6 refinements, progressing from the DB5; the Volante was in fact destined to be an ‘interim’ model that was built on a left over DB5 chassis. As a result, it is the lowest-production convertible Aston, and it remains one of the rarest and most coveted of all Aston Martin road cars today.
Our stunning car left the factory on the 3rd of June 1966 fitted with chrome wire wheels, three eared wheel spinners and a power operated aerial fitted as original factory options. The Aston was supplied new to the late Sir John Clark, CEO of The Plessey Co Ltd whom was an avid classic car collector known for his love of Aston Martin’s.
The documented chassis file shows service work carried out by the factory into 1967, where the mileage indicated was listed as 6,792 miles. Subsequent owners include P.J. Brookes and K.K. Kathcart, who acquired 2325-R in 1971 and 1981, respectively. During the 1980s, 2325-R was sold to a collector in Paris, France, under whom it was restored in the early-1990s, and then sold in June 1995. In the 1980’s the vehicle was sold to a collector in Paris, under whose ownership the car was restored in the 1990’s.
Our ultra-rare Short Chassis Volante has been commissioned by Hexagon Classics to a complete a body off & mechanical restoration and configured to left hand drive steering and power steering.Finished in the correct original manufacturers finishes of Californian Sage Metallic with Beige Hide interior & Dark Green Wilton Carpets. All works have been completed by an official factory Aston Martin Heritage Centre to the exacting standards of an original built by the factory at Newport Pagnell.
Accompanying the car is a well-documented historical chassis file which includes: