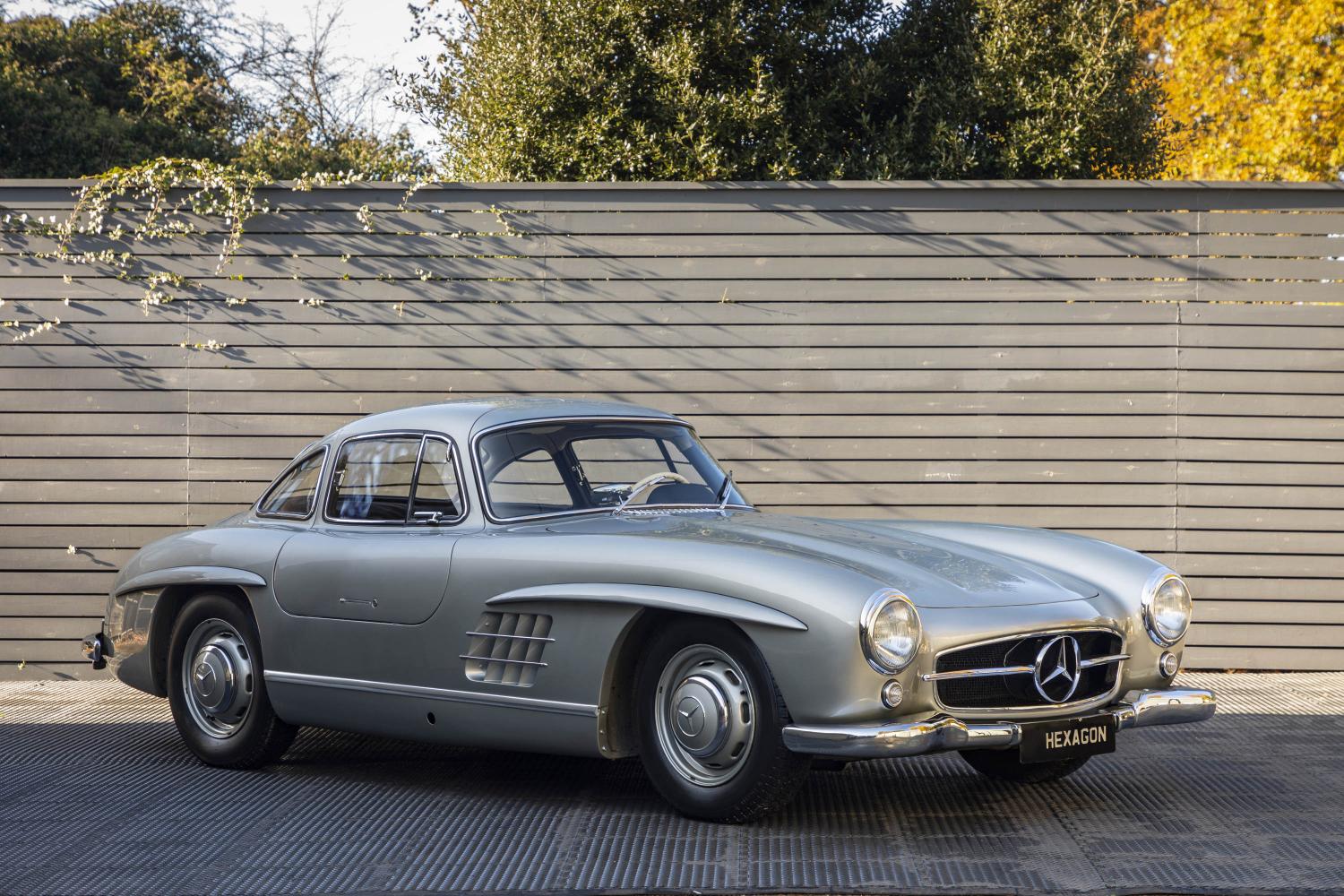 Hexagon Classics are delighted to offer a vehicle instantly recognizable not only by automobile enthusiasts, but by virtually anyone on the planet, as the immortal 300SL. The Gullwing coupe arguably competes for the title of "Greatest Sports Car of the 1950s," and no doubt qualifies for anyone's Top 10 list of the greatest automobiles of all time. We are delighted to offer this impeccable 300 SL on behalf of our client.

Without doubt, those gullwing doors are totally responsible for the public’s total admiration. When the world first saw Hermann Lang climbing out of his car after winning Le Mans in 1952, they could not have created a greater sensation than anything else in motoring history. In fact, those doors were merely an expedient, because the 300SL’s true spaceframe chassis and high sills necessitated hinging the doors on the roof. Such was the stir they caused, however, that the organisers of the Mille Miglia (where 300SLs took second and fourth) tried to ban them! The “SL” moniker, (translated in English as ‘Sport Light’), reflected the pioneering use of a welded, tubular-steel, ultra-light frame construction that weighed only 182 pounds. The car also featured fully independent suspension in addition to its fuel-injected, 3.0-litre OHC straight-six engine with dry-sump lubrication. The engine was inclined to the side to reduce the height of the front end. The power was rated at 215 brake horsepower at 5,800 rpm and delivered through a four-speed manual gearbox. A 140-mph top speed and 0–60 acceleration of approximately eight seconds, depending on the rear-end ratio selected from five options, made the 300 SL the fastest production automobile of its time.

This 300SL, offered for sale on behalf of our client, is recorded in ‘Gullwing – The Mercedes-Benz 300 SL coupé’ book written by Antony Pritchard, as having been originally delivered in February 1955 by Brooklands of Bond Street to its original owner, Sir Jeremy John Fortescue Boles, and to this day retains its original registration. Boles ordered the Gullwing at the 1954 Earls Court Motor Show. A motor racing enthusiast, Boles raced an Aston Martin DB3 ('DB3/8') and owned a Formula 2 Connaught, both of which were driven by Don Beauman during 1954/1955. This 300 SL remained in single ownership for almost 50 years.

This charismatic post-war sports car is now available for inspection at our London showrooms.